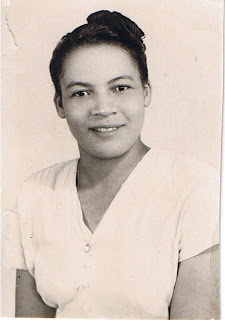 My mother’s hands always fascinated me. She rarely wore a lot of make-up or nail polish, but like every boy growing up in a single parent home, I thought she was the most beautiful woman I’d ever known. In many ways, she resembled the mother in Lorna Goodison’s “For My Mother (May I Inherit Half Her Strength)”: “She could work miracles, she would make a garment from a square of cloth/ in a span that defied time. Or feed twenty people on a stew made from/fallen-from-the-head cabbage leaves and a carrot and a cho-cho and a palmful/ of meat.” But it was always her hands, plain and unadorned—a country girl’s hands--that told her life of struggle and triumph, and from which I’ve learned so much.

My publisher lists Struie, in Westmoreland, Jamaica, as the place of my birth, but it isn’t true. Struie is the birthplace of my mother, Merty Philp née Lumley. This biographical inaccuracy really doesn’t matter to me, for I would happily claim Struie—home of the Lumleys of Westmoreland--as my birthplace.

The Lumleys of Struie are a hardy lot. My grandfather, Andrew “Big Papa” Lumley, had homes in Jamaica and Cuba. In fact, one aunt, Hortensia Lumley-Hechevaria, lived in Cuba until she passed away a few years ago. Big Papa, a cook, baker, tailor, farmer, and shopkeeper, almost resembled the description of Stephen Dedalus's father in A Portrait of the Artist as a Young Man: “an oarsman, a tenor, an amateur actor, a shouting politician, a small landlord, a small investor, a drinker, a good fellow, a story-teller…a tax-gatherer.” Big Papa, also known as "Tailor," instilled in his nine children essential survival skills, many of which my mother passed on to me and they have had a profound impact on my life.

The first time my mother taught me to sew, it was by accident. She had been trying to thread a needle and she called me into her sewing room. I threaded the needle with ease and probably made some smug remark about her eyesight to which she answered, "Geoffrey, you ever hear this saying: ‘Hog ask him mumma, 'Mumma, wha mek you mouth so long?' And him mumma answer: 'Wait pickney, yu time a come.'”

After giving me this vital lesson by using a Jamaican proverb (she was also a primary school teacher who graduated from Mico), she showed me how to sew a button on a shirt. That evening she taught me a valuable skill that has served me well—like a few years ago when I was getting ready for an important interview, and wouldn’t you know it, the button popped off my shirt. I sewed on the button, got the job, but I was never able to thank that girl from Struie.

As with many country girls, if my mother’s hands weren’t cooking, they were planting. Something. She always had a garden wherever she lived. It’s part of the African folk tradition that has weathered slavery (and gentrification) and that many people from Jamaica and the Caribbean practice without thinking about the origins. Whether it was in Mona Heights, Carol City, or Sanford my mother always had a garden.

And although she was not as obsessive about her garden as the main character in “The Day Mrs. Ho Lung Got Arrested” in Uncle Obadiah and the Alien, there were many times as a teenager (much to my embarrassment) that she sent me to gather cow dung from the open government lands in Mona Heights or Hope Pastures so that she would have fertilizer for her garden. Over time her garden grew and yielded an abundance of tomatoes, gungo peas, sorrel, mangoes (Julie, Number 11, Long Mango) sour sop, ackee, breadfruit, okra, and pumpkins in our backyard. And it wasn't because she had a "green thumb." Rather it was the tenderness she showed in everything that she did. Her generosity was evident at our Sunday dinners when we feasted on the bounty from her garden.

My mother loved cooking. It was her chance to share with us something that came from her hands—visible proof of her love for us. Now, I wouldn’t say she was a superb cook, but she taught me the basics of cooking meals such as curried goat, beef stew, and chicken soup. One of her specialties was a mean potato salad, which when I prepared it for my then girlfriend impressed her so much, she decided to give me a second chance. We’re now married.

And because I did not want to be a wutless son, I learned the lessons well. In turn, I have passed these skills on to my children. Learning how to cook, taught me how to be patient, and also to be resourceful—you’ve run out of milk, now what are you going to do? I’ve learned to provide for my family and sometimes, I’ve made a meal out of bare necessities.

Learning to sew showed me that I needed to be tenacious and  no matter what kind of clothing emergency I faced—you never get a second chance to make a first impression—I could handle it. Finally, gardening always made me aware of my relationship with the earth under my feet—with the land itself, no matter where I've lived.

Today as my family and I celebrate Mother’s Day, I know the meal that I’ll prepare for my family would not have been possible had it not been for Merty Philp née Lumley from whose generous hands taught me how to live and love.

What better testament to a mother - than to have a son who learned her lessons well! Great post Geoff.

Dear Goeff
This is a most stirring post here at your blog, a really NICE read; may God bless you, and thanks for visiting and leaving me mothers day greetings

Thank you for your comment. She really was a special woman.

Your mom was beautiful both in face and spirit

I could definitely relate to everything you wrote here. I guess it's part of being a Lumley, huh? ;-)

Yes, Nigel, we come from a great family and our mother taught us well.
Happy Mother's Day, my brother.

I'm glad I knew Aunt Merty...she was a very cool lady. I remember her and my mom having countless number of conversations in person & on the phone. I do miss them both. Happy Mother's Day to you, too.