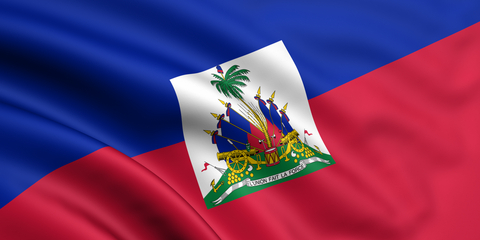 
History of the Haitian Flag

The Haitian flag is a red and blue bicolor; for state occasions, the Arms of Haiti are added to the center of the flag on a white background. The colors red and blue were chosen from the French flag.

The Haitian arms depict a royal palm in the center topped with a red and blue cap of liberty. There are also six blue and red flags, two smaller red banners on the sides, rifles with bayonets,  cannonballs, a drum, an anchor, green grass, and a white banner reading “L’UNION FAIT LA FORCE,” meaning “Union is Strength.”


Haiti is located in the Caribbean Sea. Christopher Columbus sailed to Hispaniola in 1492. Haiti and the Dominican Republic constitute the island of Hispaniola, located east of Cuba; Haiti occupies the western third of the island. Haiti’s capital city is Port-au-Prince.

If you enjoyed this post, check out my page on Amazon. I’d also be very grateful if you’d help it spread by emailing it to a friend, or sharing it on Twitter or Facebook.