The Presidential Pardon of Marcus Garvey: A Recap 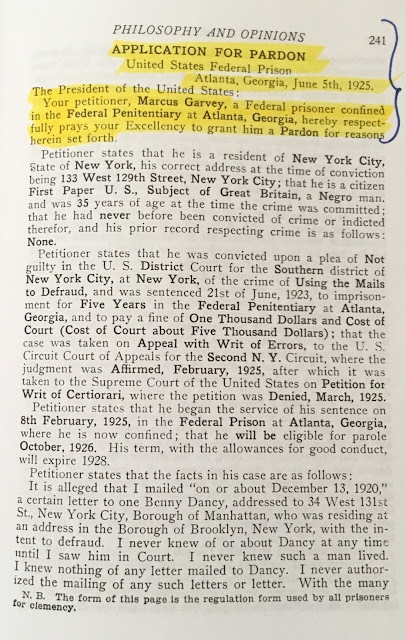 By now the news about the failure of the campaign to secure a presidential pardon for the Hon. Marcus Mosiah Garvey has been published in both print and social media and many individuals have begun offering post-mortems.

As someone who for the past decade has been actively involved in the struggle to clear Garvey’s name, allow me to offer my own critique.

I can think of four reasons why the petition did not achieve the desired goal:

While the first three could have been avoided, it is the fourth that I found the most disappointing.

The Garveyites who pursued the all or nothing strategy argued from a Manichean view of politics and Garvey’s legacy.

According to them, Garvey would have had nothing to do with any system that vilified him, or they brought up the “straw man” argument that the Jamaican government should have first cleared Garvey’s name in Jamaica before attempting to petition the US government:  “Dance a yard before you dance abroad.”

Both arguments are what the late Mutty Perkins would have called ”arrant nonsense.”

They have called those of us who supported the petition “sellouts,” “cowards,” and “House Negroes.”

So, let me set a few facts straight.

First, we are merely finishing work that Garvey himself started when he applied for a presidential pardon, which I have reproduced from The Philosophy and Opinions of Marcus Garvey.

Also, those of us who petitioned for a presidential pardon have not forgotten that Garvey held public office in Jamaica and supported Alfred Smith for electoral office in the USA. So, yes, Marcus did work with Babylon—he even met with the KKK to further the redemption of “Africans at home and abroad.”

Now, as far as clearing Garvey’s name is concerned, there are three options:

Let’s go through them one by one.

The courts have refused to reopen a ninety year old case, so that won’t work.

The bills that Rep. Rangel and Rep. Conyers have introduced to Congress have never made it to any president’s desk. So that won’t work.

The only viable alternative would be a pardon from President Obama, who has quoted Garvey in his book, Dreams From my Father. And if they had taken the time to research the topic they would have seen that Dr. Julius Garvey, Marcus Garvey’s son, had requested that language to the effect that Garvey was innocent should be included in the pardon.

But many of these Garveyites want to hold on to purist idea of themselves without any regard for the historical process.

The all or nothing strategy of these Garveyites does not help in the long run. For example, a few years ago group of activists tried to rename a street in Miami Gardens—a predominantly black enclave in Miami—Marcus Garvey Drive. This provision was met immediately by claims that Garvey was a criminal, which sidetracked the debate into explanations about Garvey and J. Edgar Hoover.

This has happened time and time again whenever activists in the US have tried to do anything to advance Garvey’s name or to canonize his memory. We are always thrown on the defensive because we have to give long explanations about Garvey, mail fraud, and the Black Star Line. A presidential pardon would, at least, remove one line of attack from those who oppose Garvey’s Pan-African vision.

But these Garveyites want nothing to do with that. History begins and ends with them.

Yet, this has not been, nor do I suspect it will be the last defeat. However, I will continue teaching youngsters about Garvey and Dr. King with Marcus and the Amazons and young adults with my novel, Garvey’s Ghost.