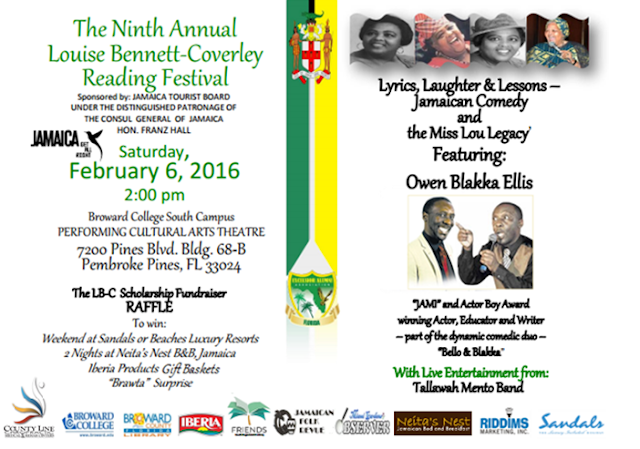 The Friends of the S. Regional Broward Library, Jamaican Folk Revue, Inc. and Broward College are partnering to bring to the community, the 9th Annual Louise Bennett-Coverley Reading Festival.

Presented under the patronage of the Consul General of Jamaica, the Hon Franz Hall, the Festival is free to the public and forms part of the S. Regional Broward Library’s schedule of activities for Black History Month. Entertainment will include Tallawah Mento Band, “Dr. Sue,” Sierra Norwood Calvary Children, Easton Lee, the Jamaican Folk Revue and NDTC’s Jordan-Leigh Wyatt, presenting a tribute in dance, to the late Bob Marley.

The inimitable Owen Blakka Ellis describes his presentation, as “weaving storytelling, poetry, stand-up comedy…..to share perspectives on the evolution of comedy, as a distinctive entertainment genre in Jamaica and the role and impact of the work of the Hon. Louise Bennett-Coverley in this process."

“Blakka” Ellis, comedian, writer, educator and performing artist, is an alumnus of both Excelsior High School & the Edna Manley College of the Visual & Performing Arts in Jamaica, where he taught English, Literature and Drama, before migrating to Canada. Widely acknowledged as a leading Caribbean entertainer, who has appeared with comedian Oliver Samuels, Blakka is part of Jamaica’s beloved comedic duo - “Bello & Blakka.” He co-wrote the National Pantomime “Schoolers,” which won the Jamaica Music Industry (JAMI) award in 1989, co-produced and starred in, one of the most successful comedy productions -“Laugh Jamaica,” winning the “Actor Boy Award” for Best Revue.

We are delighted to present Owen “Blakka” Ellis, at the 9th Annual LB-C Reading Festival, which since its inception, has grown in popularity, and has awarded 14 scholarships in Miss Lou’s name, to students at both the Edna Manley College in Jamaica and S. Florida’s Broward College.

This annual event, launched in 2007, to celebrate the life and legacy of the Hon. Louise Bennett-Coverley, OJ (Miss Lou), cultural icon, social commentator and internationally acclaimed folklorist, addresses the immense influence that her works have had, on Jamaicans at home and abroad and continues to attract overflow audiences and cultural enthusiasts from the diasporic community.
Through proceeds from fundraisers & tax-deductible donations, and with the support of the Jamaica Tourist Board, Sandal’s Hotel Group, County Line Chiropractic, Iberia Foods, Antilles Freight Corporation, Neita’s Nest B&B, (Ja), Top Hill Treats, XLCR Alumni Association, and our invaluable Media Partners, the Louise Bennett-Coverley Reading Festival continues to educate, and bring a high level of cultural awareness and entertainment, to South Florida’s Community. 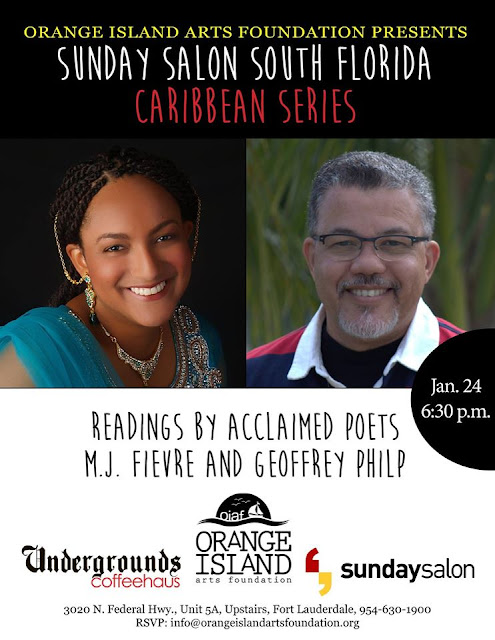 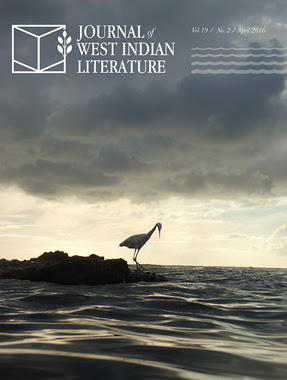 The Journal of West Indian Literature has been published twice-yearly by the Departments of Literatures in English of the University of the West Indies since October 1986. Edited by full-time academics, the journal originated at the same time as the first annual conference on West Indian Literature, the brainchild of Edward Baugh, Mervyn Morris and Mark McWatt. It reflects the continued commitment to provide a regional and extra-regional forum for the dissemination and discussion of anglophone Caribbean literary and artistic culture. Initially featuring contributions from scholars in the West Indies, it has become an internationally recognized peer-reviewed academic journal.

JWIL’s editorial board welcomes articles in English that are the result of scholarly research in literary textuality (fiction, prose, drama, film, theory and criticism) of the English-speaking Caribbean; comparative assessments of non-Anglophone Caribbean texts are also accepted, provided that translations into English of the relevant parts of such texts are incorporated into the submission. JWIL will also publish book reviews.

In 2011, founding editor Mark McWatt celebrated JWIL’s twenty-fifth year of publication as a regional, UWI-led Caribbeanist project invested in highlighting and critically examining the prolific literary production of the Anglophone Caribbean. McWatt observed at the time that there was talk about the journal, which printed its first volume in 1986, “becoming exclusively an on-line publication” in the interests of international recognition and access. Of course, things moved slowly when the editors were all full-time academics juggling multiple responsibilities across the three campuses of the University of the West Indies, but only four years afterward, JWIL has indeed transitioned to an online platform. http://www.jwilonline.org/ is the journal’s first website, and it will be the platform for the first online volume: the double-issue Vol. 23 Nos. 1&2, which will appear in late December 2015, and will be open access for a limited time.