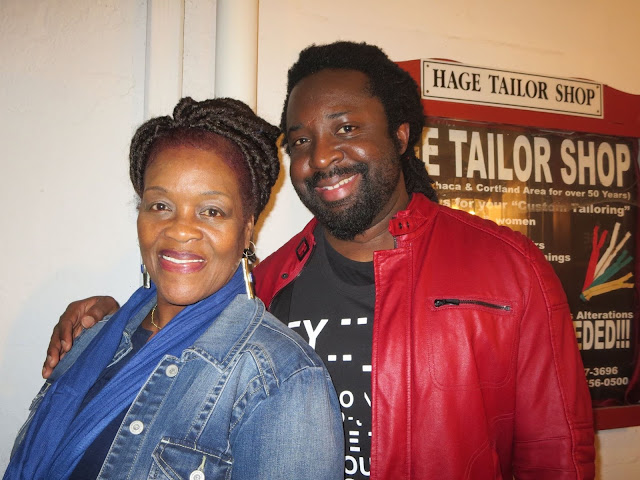 
Until the philosophy which holds one race superior and another inferior is finally and permanently discredited and abandoned;
Until there are no longer first class and second class citizens of any nation;
Until the color of a man's skin is of no more significance than the color of his eyes;
Until the basic human rights are equally guaranteed to all without regard to race;
Until that day, the dream of lasting peace and world citizenship and the rule of international morality will remain but a fleeting illusion, to be pursued but never attained.
Until bigotry and prejudice and malicious and inhuman self-interest have been replaced by understanding and tolerance and good-will;
Until all Africans stand and speak as free beings, equal in the eyes of all men, as they are in the eyes of Heaven;

The chorus as we know is:  “There will be war,” a promise of unending violence. And we already know that these wars are both across national boundaries; but often internal as well. And in the case of the Americas, the violence of indigenous genocide, the African maafa and the succeeding three centuries of enslavement and continuing colonialism, American imperialism and its attending ills, have cumulatively produced a certain unending violence, often re-enacted within groups.

These words from Haile Selassie’s  1963 speech to the United Nations are just as relevant now as they were over fifty years ago. I begin with them deliberately.  They inspired  and were charged by Jamaican reggae legend Bob Marley in one of his classics. It is significant to mention these two conjunctions, as they are precisely what animates Marlon James’s classic text.  Bob Marley functions as a veiled fictional presence in Marlon James’s prize winning,  A Brief History of Seven Killings (2014). Bob Marley was the voice of  resistance, throughout the US and Caribbean Black Power period, (1970’s-90’s) engaging political and knowledge fields like Pan Africanism,  Rastafari, the African Diaspora, Human Rights but also Love, Sexuality and liberation, for a generation, with rhythms and lyrics that became movement anthems that still endure.  In many ways the singer, as he is termed in this novel,  becomes the creative metaphor  or center of the text, if one exists;  but also the one who in many ways generates the text and around whom but also to whom, some of the killing is directed. Marlon lets us see the singer through the eyes of several male characters but also through the voice of Nina Burgess the most fully developed woman in the text, who lives to migrate to the U.S.

But around the singer as around Nina Burgess, who functions as a witness,  there is an extreme masculinized violence  in language, as in politics and definitely in practice, that populates this not at all brief history.  Some call it a polyphony others a cacophony  or even a whirlwind of voices, another,  a collage of voice through which these stories are told in a cast of characters already made it seems for screen and optioned by HBO.   Here the dead speak right from the start. Here assassins execute; CIA agents operate; killers kill; drug dealers deal in what all reviewers agree is an epic novel, taking Caribbean literature fully into new possibilities.  For one of his fellow Jamaican writers, Geoffrey Philp author of Garvey’s Ghost  the following assessment:  “Compared to earlier writers, Marlon does not prettify or romanticize the violence.  He pushes the boundaries of what is possible in Caribbean writing and goes to places in his writing that many of us have not dared to go.”

For me, a Caribbean-American feminist critic,  Marlon James had revealed his ability to develop a space for women and resistance in The Book of Night Women.  (2009)  set in plantation Jamaica in which before “Django”  we have an enslaved woman, killing a rapacious slave master and burning down a plantation great house (think of a Linda Brent who does not hide in the attic for seven years) and walking away from the act.  Still my favorite is his John Crow’s Devil  (2005 )  an experimental and surprisingly beautiful encounter  with his version Caribbean magic realism,  sexuality, insanity, possession, the supernatural with corrupt evangelical ministers as the lead characters,  all carried out in a Caribbean country side,  which will never make it into the tourist brochures. This book we learn was rejected over 70 times. For the would-be writers in the audience:  Courage!

Marlon James who describes himself as a post-post-colonial, in the sense of no longer having to deal with the UK but with the USA was born in Jamaica in 1970.  He writes about his coming into himself as a writer and in claiming his sexual identity in “From Jamaica to Minesota to Myself” New York Times, March 10, 2015. And finding himself in Minnesota,  even as he gains international fame, he remains grounded,  as  he wrote, after the acquittal of the police killer of Philando Castille, the realities of  the psychic and physical violence of continuing racism and the possibilities of accidental  or deliberate police execution  as a reality for black people in America.  It is a classic critique which I recommend to all titled:  “Smaller, And Smaller, and Smaller” (June 17, 2017) which my Writing Black Experience read today and had amazing responses to:


I have a big global voice, but a small local one, because I don’t want to be a target, and resent that in 2017, that’s still the only choice I get to have. … I go out of my way to avoid police, because I don’t know how to physically act around them. Do I hold my hands in the air and get shot, Do I kneel and get shot? Do I reach for my ID and get shot?

… You will never know how it feels to realize that it doesn’t matter how many magazines articles I get, or which state names a day after me. Tomorrow when I get on my bike, I am big black guy, who might be shot before the day ends, because my very size will make a cop feel threatened. Or if I’m a woman, my very mouth. And a jury of white people, and people of colour sold on white supremacy will acquit him. And even me hoping for hipster points on my fixed wheel bike, is countered by them thinking I probably stole the bike.

Marlon James won the 2015 Man Booker Prize for A Brief History of Seven Killings, and has also won many other prizes for his other works.  He lives in Minneapolis, Minnesota and teaches English and creative writing at Macalester College.

Thomas Glave in  his introduction to  Our Caribbean.  A Gathering of Lesbian and Gay Writing from the Antilles, (2008)  says:  “What would it be like to attend – to truly hear,  for once – the many conversations that we have had with each other and still need so very much to hear? What would it be like to listen to and now, by way of a gathering of voices like this once, actually observe these conversations between ourselves?”

I invite you to listen to Marlon James.