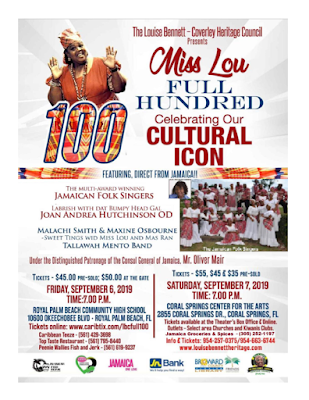 Music lovers in South Florida are in for a very special experience - the Jamaican Folk Singers are coming to South Florida. They will give two concerts only, one in Palm Beach on Friday September 6, the other in Coral Springs on Saturday September 7. The Miss Lou Full 100 concerts are presented by the Louise Bennett Heritage Council, as part of their homage to the late Louise Bennett-Coverley – Miss Lou- Jamaica’s beloved cultural icon, in this her centenary year.

Miss Lou, a poet, actor, comedienne and activist, popularized all aspects of Jamaican folklore including songs, dances and children’s games.

The Jamaican Folk Singers have received international acclaim and numerous awards for the range and depth of their repertoire and their harmonious multi-part vocals accompanied by guitar, drums, flute and rhumba box. The combination of singers and musicians and their simple, yet expressive choreography makes for a moving and unforgettable musical experience.

Jamaican folk music grew out of West African traditional music with some European influences combined with the unique Jamaican dance, song and instrumental form – mento.  The Folk Singers have an extensive repertoire of over 200 songs. Christine McDonald-Nevers leads the group, now in its 52nd year of delighting audiences at home and abroad.

The group will present folk songs arranged by their founder, classically trained musician and ethnomusicologist, the late Dr. Olive Lewin who was appointed by the Jamaican government in 1966 to research and collect Jamaican folk music. The musical forms include Bruckins, Jankunnu, Kumina, Quadrille, Tambo and Gerreh. A new feature of the Folk Singers’ repertoire, is Pull up the vibes.  This section features folk songs performed in the hugely popular, more urban idioms of ska and dancehall.

The Folk Singers take their mandate to pass on their music to the younger generation seriously while also celebrating the older generations who handed down the songs, dances and religious rituals that are woven into Jamaican folk culture. In Jamaica, they frequently give free performances at schools, hospitals and community events. Their members are also actively involved in teaching and Jamaica folk music, stemming as it does out of the experience of slavery, is multi-layered. The songs include work songs, lullabies, laments, songs used in religious and secular rites, social commentary songs that poke fun at some unfortunate and the double entendre songs of flirtation and courtship.  Jamaicans love and cherish their folk music and it is easy to see how ska, rock steady and reggae grew out of this rich musical heritage, with reggae, in particular, becoming a world-wide phenomenon.

Folk music is special and personal because it comes from the heart of the people. The songs tell of troubles and joys, fears and hopes. They send out a musical invitation to visit and sit awhile and get to know a culture intimately. South Florida audiences will have just two opportunities to accept this special invitation to enjoy and celebrate Jamaica’s rich folk heritage.

A highlight of the Miss Lou Full 100 concert is a performance by poet, broadcaster and actress ‘Dat Bumpy Head Gal’ -Joan Andrea Hutchinson who, following in Miss Lou’s footsteps, writes and performs in Jamaican patois. An accomplished communicator with 3 books, and 7 CD’s to her credit, she is also a stellar performer, engaging her audience with her hilarious observations on Jamaica and Jamaicans.  Also featured are Malachi Smith and Maxine Osbourne with their take on Miss Lou and her stage partner Maas Ran, and the Tallawah Mento Band.

Miss Lou Full 100 featuring The Jamaican Folk Singers will be held on Friday, September 6, 7:00pm, at the Royal Palm Beach Community High School. Book tickets at: www.caribtix.com/lbcfull100. And on Saturday September 7, at 7:00pm at Coral Springs Center for the Arts. Book tickets for this event at: www.thecentercs.com.

For more information go to: www.louisebennettheritage.com
on August 22, 2019 No comments: 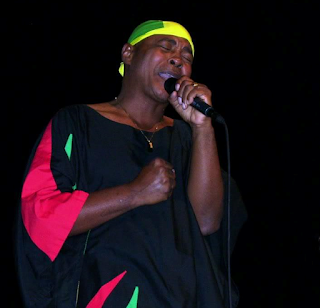 Internationally acclaimed dub poet Malachi Smith, is set to represent Jamaica at the VII International Festival of Contemporary Poetry, which will be held from August 28--31, 2019, in the city of San Cristobal de las Casas, Chiapas, Mexico. The prestigious festival will feature poets from all over the world and will be in tribute to Mexican poet Jaime Mario Labastida Ochoa. Readings will take place in educational institutions and cultural spaces including Native People, the UNACH, among others.

The founding member of the internationally acclaimed group of performance poets, Poets in Unity, Smith has been representing Jamaica at international poetry festivals since the 1990s. He has appeared in South Africa (twice), Taiwan, Columbia, Nicaragua, Honduras, St. Kitts and Nevis, and Canada, where he was the headliner performer at the international dub poetry festival there.  He also appeared at the La Guagua Poetry Festival in Lowell, Massachusetts,  in  2019.

As a James Michener Fellow at the University of Miami, Malachi studied poetry under Lorna Goodison, and playwriting under Fred D’Aguiar. The 2011 Life Time Achievement Award winner (Independent Voyces), has won many awards for his writings including the Jamaica Cultural Development Commission’s (JCDC) 2009 Most Outstanding Writer award, JCDC Best Adult Poet 2014 and 2017 and JCDC’s 4th place Choice Writer for 2018 for a gold medal for poetry and a bronze for short story. Malachi won the 2016 Akamedia Award for his poem “How Yuh Mek Her Massa God.” He was also a nominee for the International Reggae & World Music Award (IRAWMA) for 2019.

Malachi has two published collections of poems, Black Boy Blue and The Gathering and seven CD collections, Throw Two Punch, The Blacker The Berry….De Sweeter de Cherry, Middle Passage, Hail to Jamaica, Luv Dub Fever, SCREAM and his latest offering, Wiseman. In addition, he has had his poems published in prestigious journals and publications such as Poui, Cave Hill Journal of International Writing, the West Indian Journal of Literature, Carrier Pidgin Journal, The Caribbean Writer, and the University of the Virgin Island, Peepal Tree Press and Write in Our Midst Miami Book Fair International. His poems have been translated in both Spanish and Mondrian.

Smith is the founder and organizer of the highly successful Jamaica Poets All-island High School and College Tour, which takes place annually in Jamaica. He is a board member of the Louise Bennett-Coverley Heritage Council, Caribbean Education Foundation and the Jamaica Ex-Police Association of South Florida.