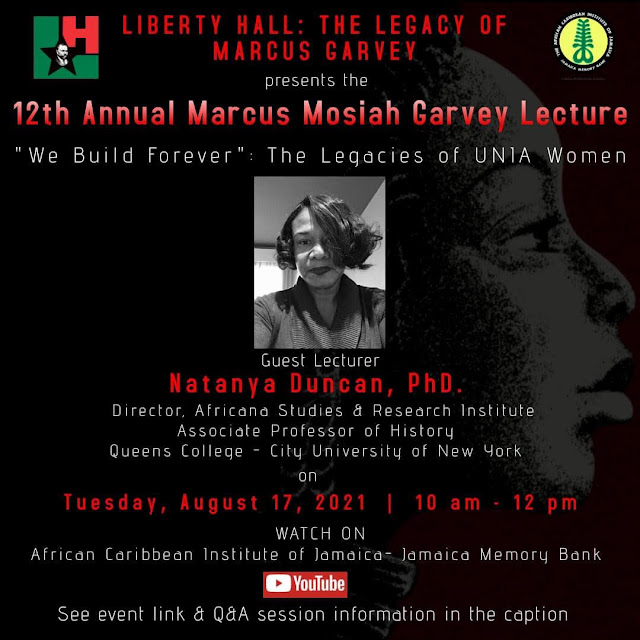 On Tuesday, August 17, 2021 Liberty Hall: The Legacy of Marcus Garvey will host the twelfth (12th) Annual Marcus Mosiah Garvey Lecture. This staging, therefore, will focus on the legacies of the UNIA women. Our guest lecturer, Natanya Duncan PhD., Director of Africana Studies and Research Institute, and Associate Professor of History at Queens College City, University of New York will present on the theme: “We Build Forever”: The Legacies of UNIA Women.

We will stream the event live on the African Caribbean Institute of Jamaica /Jamaica Memory Bank’s (ACIJ/JMB) YouTube page from 10 am – 12 pm. To watch the event, please click on the following link https://www.youtube.com/watch?v=xth9mtQW-pY

During the presentation, please send your questions to lhannualgarveylecture@gmail.com; questions will be read and answered during the Q&A session. 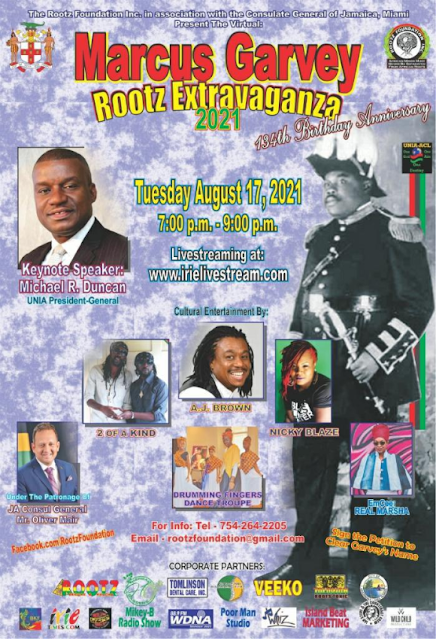 The 2021 Marcus Garvey Rootz Extravaganza will be streaming live from the Courthouse Tower offices of the Consulate-General of Jamaica in downtown Miami, Florida, on Tuesday, August 17, 2021 from 7:00 p.m. to 9:00 p.m.

The upcoming Marcus Garvey birthday anniversary event will commemorate the 134th anniversary of Garvey’s birth and is being hosted by the Rootz Foundation Inc. in association with the Jamaican Consulate General – Miami.

The livestream by Irie Times will be broadcast on irielivestream.com

The program will also feature the petition to clear Marcus Garvey's name: http://chng.it/FbcKNSnf