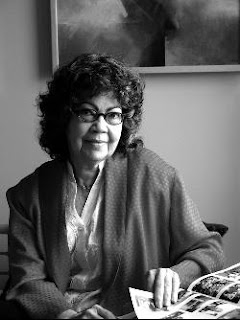 In Frances-Anne's post, she wrote, "Creation is a form of Terror, particularly when you come from a colonial context and background in which Empire (read: a sense of inferiority) was imposed through education, language, culture, as much if not more than through the barrel of a gun." This insult to our minds, hearts, and bodies is one of the themes of Olive Senior's, "Colonial Girls School," and the erasure of sense and sensibility by suppression of the natural, denial of the native, and the implied superiority of "northern eyes" is masterfully woven through the text with use of the prefix-de. The poem's iconoclastic language relies on the metaphor of "images" that are shattered at the end of the poem, "How the mirror broke," and the word play on "pale."


Told us nothing about our selves
There was nothing at all

Throughout the first stanza and the refrain, the speaker uses the language of servitude and slavery with the words, "muffled," "lowered," and "harnessed." The girls' bodies "our skin, " and minds have been "yoked" to a system that is foreign to their way of being.

How those pale northern eyes and
aristocratic whispers once erased us
How our loudness, our laughter
debased us.
There was nothing left of ourselves
Nothing about us at all

The speaker continues to show the effects of the "pale northern eyes" on the girls and the subsequent reduction of self-esteem.

Studying: History: Ancient and Modern
Kings and Queens of England
Steppes of Russia
Wheatfields of Canada

The next stanza is a turning point in the poem after the catalogue of injustices wrought by colonialism that resulted in the speaker's inability to "see" herself history, the landscape and literature, or even to appreciate herself because "There was nothing at all." Racism and patriarchal colonialism result in a kind of invisibility that was fully explored in Ralph Ellison's, Invisible Man.

Marcus Garvey turned twice in his grave.
'Thirty- eight was a beacon. A flame.
They were talking of desegregation
In Little Rock, Arkansas, Lumumba
and the Congo. To us mumbo-jumbo.
We had read Vachel Lindsay's
vision of the jungle.

So, friend of my childhood years
One day we'll talk about
How the mirror broke
Who kissed us awake
Who let Anansi from his bag

With the introduction of Marcus Garvey and the Trickster, Anancy (Eshu) there is a reversal of the former condition. Senior masterfully demonstrates the transformation with a change of meaning of the word "pale." The "pale" northern eyes" that once denigrated the speaker's humanity have now become "pale" in significance.

"Colonial Girls School" is one of Olive Senior's best known poems and a study of her short stories and poems reveals a writer who has been grappling with the "decolonization of the mind."

Olive Senior was born in 1941 to peasant farmers in Trelawny, Jamaica, the seventh of ten children, and later migrated to Canada. She is the author of several collections of short stories: Summer Lighting (1986), Arrival of the Snake-Women (1989), and Discerner of Hearts (1995); collections of poetry Talking of Trees (1986), Gardening in the Tropics (1994), and Over the roofs of the world (2005); and non-fiction about Caribbean culture: A-Z of Jamaican Heritage (1984) – greatly expanded and republished in 2004 as The Encyclopedia of Jamaican Heritage – and Working Miracles: Women’s Life in the English Speaking Caribbean (1991).


If you are searching for posts about Bob Marley, Marcus Garvey, Rastafari, or Dennis Scott, please check the archives.

Also, if you enjoyed this article, please visit my Author page @ Amazon.com

or  donate to this site:

This is a question
Could a theme from Colonial Girls School be oppression?

I'm always a teacher, so why do you think the theme could be oppression?

the theme couldn't be oppression, it is colonization or racism.

But aren't racism and colonialism forms of oppression?

That is true racism and colonialism are both forms of oppression. The difference between them is; racism deals with prejudice that is just skin deep, based on what race you are. Colonialism has to deal with the oppression against the native people of the land which is done by the mother land. Basically racism is a subset of colonialism.

That is true racism and colonialism are both forms of oppression. The difference between them is; racism deals with prejudice that is just skin deep, based on what race you are. Colonialism has to deal with the oppression against the native people of the land which is done by the mother land. Basically racism is a subset of colonialism.