"Rastafari in the 21st Century" @ the Miami Book Fair 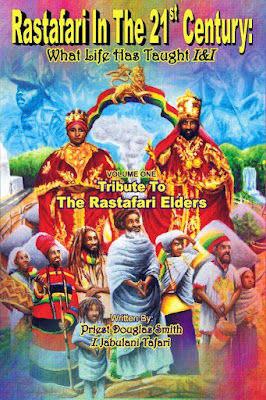 “Rastafari in the 21st Century – What Life has Taught I&I”

Join Priest Douglas Smith and Ras I. Jabulani Tafari at the 38th annual Miami Book Fair as they host the South Florida launching of their new book "Rastafari in the 21st Century: What Life has Taught I&I.” The Book Fair takes place at the Wolfson Campus of the Miami Dade College in Downtown Miami from November 14 to November 21, 2021.

The Book Fair presentation by Priest Douggie and I-Jabulani and the launch of “Rastafari in the 21st Century” is scheduled for Saturday, November 20 at 5.00 p.m. in Room 8106 (the Magic Screening Room) on the first floor of Building 8.
Rastafari 21st Century Vol 1 Front Cover-smallest.jpg

Volume One of the new book by Priest Douggie and I-Jabulani contains the previously unwritten history of the First Generation of Rastafari Elders. Today, many of that First Generation of Rastafari Elders are transitioning on to become Ancestors, and as they do so, their colorful and important life stories are already starting to fade from the collective memory of the people of Jamaica and the world.

This well-illustrated and thought-provoking volume was written as a literary tribute lest the world forget to highlight and honor those Rastafari Elders who sacrificed everything and endured so much with so little in order to establish a new Cultural Tradition and Way of Life. 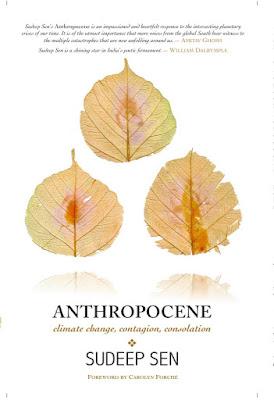 ANTHROPOCENE Climate Change, Contagion, Consolation by Sudeep Sen is a harrowing account of living with the effects of climate disruption during a pandemic. Using various literary techniques such as haiku, free verse, and prose poems, Sen from a “panoramic picture window” from his study in New Delhi, India, captures the sense of dread from the unpredictability of weather patterns and his isolation during the city’s lockdown. And while the theme of hope resonates throughout the collection, Anthropocene is a harbinger of a possible future if the trajectory of climate disruption remains unchanged.

Divided into nine sections, Anthropocene begins with “Prologue| Meditation,” in which Sen acknowledges his position of privilege. As he states later in the collection, “Solitude is something that most creative writers and artists crave, and yet when it is forced on you –how does one cope?” (“Poetics of Solitude, Songs of Silence”). In wrestling with this paradox, Sen relies on his dedication to his craft and epigrams from Eliot, Yeats, Beckett, and especially Kurosawa, “The role of the artist is to not look away,” to guide his inquiry.

Underscoring the second section, “Anthropocene| Climate Change,” with a quote from “Easter 1916”: “a terrible beauty is born,” Sen in “Climate Change 2,” puts his stamp on the memorable phrase with a haiku: “climate change: changes/ the terrible beauty of/ unbearable heat.” With an acute awareness of his environment, Sen records the disruptions that are already taking place in India: “Tap water scalds everything it falls on—turning all furnace hot. Heat rises from everywhere—surfaces, terraces, walls, linen, food, water—everything is vaporous” (“Summer Heat”). The dryness of the land leads to heatwaves, and in “Drought, Cloud,” Sen prays for rain, “It is bone dry--I pray for any moisture/ that might fall from the emaciated skies.” However, Sen’s prayers do not have the consequences he intends: “Rain where there never was,/ no rain where there was” (“Global Warming”). Riffing on the idea of the “terrible beauty” of climate change, Sen recognizes the rain’s seductive ability to “douse and arouse” (“Rain Charm”). Yet, ironically in “Shower, Wake,” he describes a frightening scene: “The September showers came too late, giving ample time for a prolonged drought. But when they eventually arrived, they brought with them the full fury of an unstoppered monsoon — the rain pelting down hard, cracking open newly laid tarmac, exposing the earth and the elements once again.”

Opening the third section, “Pandemic| Love in the Time of Corona,” with an homage to Gabriel Garcia Marquez, Sen combines Indian mythology “Krishna’s love for Radha” with a fixed focus on the effects of climate disruption on the poor: “In thousands migrant workers march home--/ hungry footsteps and empty highways” (“Love in a Time of Corona”). Then, in “Corona Haiku 5,7,5,” Sen documents some of the routines that predominate his life: “endless handwashing, /sanitisers, gloves, masks—a/ new apocalypse,” and his impotence in the face of the pandemic’s advance, “dread of death, death of/loneliness--our choices/ out of our hands.” As the death toll rises, Sen laments the loss of his friends, “One by one they are dropping dead/at the rate of a heartbeat,” and later in “Black Box: Etymology of a Crisis,” he confesses, “Where are you?” I can’t hear you, touch or feel you. All senses have evaporated. I have nothing. I have everything.”

In sections four to nine, Sen contrasts the sprawling view of the city with his solitude by juxtaposing photographs taken from the poet’s terrace, “day after day,” with prose poems arranged in columns that resemble silos. Still, despite the expansiveness that the photographs suggest, Sen is increasingly driven in poems such as “Fever Pitch” into an interiority that comes close to solipsism, “All around me is a vacuum--and beyond that glass--and beyond that a semblance of life and world.” As an antidote, Sen retreats to his library for companionship and consoles himself with quotes from Aldous Huxley, Thomas Mann, and John Milton. Perhaps, as a refutation of Milton’s Satan in Paradise Lost, “myself am hell,” Sen’s reaction to isolation is discovery, “And yet in this isolation and solitude, there is an inherent yogic sense of centredness, where being with oneself is both wholesome and multitudinous” (“Poetics of Solitude, Sounds of Silence”).

Yet, hope, whether or not warranted, arises from the poet’s “inherent yogic sense of centredness.” His practice grounds him: “Through years of untutored regimen, this process has become second nature, like any meditative practice” (“Poetics of Solitude, Sounds of Silence”). Another way that Sen’s “centredness” shows up is in his fearlessness, which sometimes, as in “Preparing for a Perfect Death,” borders on gallows humor: “Then, the most difficult part--/how and where to die, what to wear.” In a fitting metaphor for his hope, Sen asserts in “The Gift of Light’: “The gift of light/ is life’s benediction/ in these dark times--/no matter what or where/ there is always light.” The final poem of the collection, “Om: A Cerement,” concludes with an invocation from the Upanishads, which Eliot used in the last lines of “The Wasteland,”: “Om’s celebration now/ an unceasing requiem. Yet we chant in hope, / for peace; Om Shantih, Shantih, Shantih.”

ANTHROPOCENE Climate Change, Contagion, Consolation, a timely meditation on the effects of the pandemic and climate disruption, offers readers an opportunity to delve into a world of a poet who is attuned to the changes in his body and environment. His focus on the plight of the migrants and his attention to the lives of his friends rises to the level of prayer as Simone Weil in Gravity and Grace muses, “Attention, taken to its highest degree, is the same thing as prayer.” In this sense, Anthropocene is both a prayer and a jeremiad. I hope we will listen.