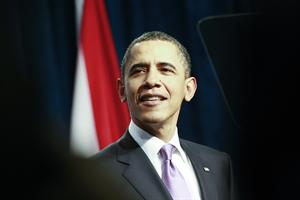 I can't wait to hear President Barack Obama deliver the keynote address at the graduation ceremony of the North Campus of Miami Dade College (my alma mater and where I work) on Friday, April 29, 2011, at 5 p.m., at the James L. Knight Center in downtown Miami.

I wonder if I'll get a chance for him to autograph my copies of The Audacity of Hope and Dreams from My Father?

Miami, March 15, 2011 - More than 3,000 Miami Dade College (MDC) graduates will hear from the 44th President of the United States of America on Friday, April 29, 2011, at 5 p.m., at the James L. Knight Center in downtown Miami, as President Barack Obama delivers the commencement address for the spring graduation ceremony of the North Campus. The Commander-in-Chief’s participation in an MDC commencement ceremony continues the college’s longstanding tradition of hosting world leaders, renowned speakers and top thinkers at graduation. He will speak at one of eight graduation ceremonies representing the college’s eight campuses that weekend.

“We are extremely pleased to have President Obama address our graduates as he has made college access and completion a central focus of his administration,” said Dr.Eduardo J. Padrón, MDC’s president.

Miami Dade College is the nation’s largest institution of higher education with an enrollment of more than 170,000 students. In fact, 1.7 million people have attended the college since it opened its doors in 1960. MDC is a global college enrolling students from 182 countries. MDC also graduates more Hispanics and African Americans than any other higher education institution in the nation. The college’s eight campuses and outreach centers offer more than 300 distinct degree programs including several baccalaureate degrees.  MDC is also renowned for its rich cultural program. It is home of the Miami Book Fair International, Miami International Film Festival, the Cultura del Lobo performing arts series, the National Historic Landmark Freedom Tower, and a large art gallery and theater system.