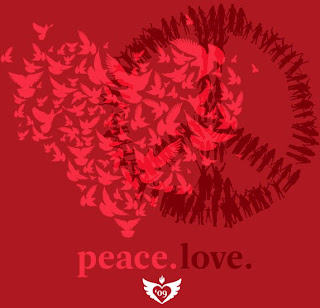 For the four days that I was in Treasure Beach for Calabash 09, I saw two Jamaicas. The first greeted me in the warmth of the people of people of St. Elizabeth--which extended to the festival--and the second announced itself in the bold headlines of the newspapers reporting yet more murders in Kingston and the efforts of the government to curb crime.

Two realities in stark contrast emerged with the sunrise and sank into the Caribbean Sea at sunset. And the dissimilarity cannot be merely attributed to the difference between urban and rural Jamaica. Rather, like all social phenomena, they exist by individual and/or collective consent.

So, on the one hand, there were the organizers, audience, and participants who came together to create an environment where a community could share and define themselves, as Pico Iyer suggested, by their values. In the case of Calabash 09, the values were annunciated by the tags: Peace & Love.

This is not a coincidence. Peace & Love were the principles that guided Rastafari in Jamaica during the seventies—one of the most creative periods of our history. Then came the unofficial civil war (of which we’re still seeing the effects) and the exodus.

Calabash 09 had that seventies feeling—that vibe of serious play between the audience and participants. For those four days, I witnessed the natural graciousness of Jamaicans (like Anthony Bourdain’s welcome by a Jamaican matriarch even as he warned about crime in Jamaica) and got a glimpse of pre-diaspora Jamaica without the internal contradictions that led to the mass immigration.

And the vibe was important. It started, as always with the music—reggae--which was omnipresent throughout the festival. Peace and Love was encoded in reggae. Peace and Love was present even in midst of the most apocalyptic choons by Bob Marley and the Wailers, whose lyrics led Kwame Dawes to coin the term “reggae aesthetic” to describe the influence of reggae on Jamaican culture. According to Dawes, the “reggae aesthetic” combines music, identity. community, politics, economics, and spirituality. Sounds like Calabash to me—which began with music and ended with music and benediction. This should not come as a surprise to anyone. For Jamaicans are, as Kwame once said to me in an e-mail, “a spiritual people engaged in matters of faith rooted in experience.”

In other words, Calabash demonstrated a model for social interaction in Jamaica which is based on indigenous values that are part of our history and culture. We know this. And if we could allow for the kind of tolerance that used to be part of our cultural life and is still practiced in the countryside, we could be on to something. For it is when we are most open that we are most beautiful.

For me, it was a glimpse of what heaven should be: a lover by your side, sky, beach, books, Red Stripe, and great conversations with interesting people. For I-ver.

Our politicians instead of spending time trying to curb crime should be stressing, especially in the face of globalization and the creation of niche markets, the positives aspects of Jamaica culture. It’s like Mother Teresa said when she was invited to an anti-war rally, “I will never attend an anti-war rally. If you have a peace rally, invite me." But attitudes like that can only come from leaders who are committed to and who will embody our highest ideals.

Calabash began with the commitment of a few idealists, but as a another strong woman, Margaret Mead, said, “Never doubt that a small group of thoughtful, committed citizens can change the world. Indeed, it's the only thing that ever has.” I don’t want to see worldwide change. I’d just like to return to a place that doesn’t have 1,611 murders in one year. I don’t want two Jamaicas. I’d just like a Jamaica of One Love.

this is an excellent post and wonderful quote from Mother Theresa. So important to highlight the positive, it creates a positive vibe that sends out so many ripple and can change things for the better.

Thanks, Crafty.
It's only the positive that will lead us out of the current conditions in Jamaica.

The question for me is always how to restore the Jamaica that still lies underneath the nastiness that has come to represent the country. I'm glad to see that Jamaica is still there, out in south St Elizabeth.

"For me, it was a glimpse of what heaven should be: a lover by your side, sky, beach, books, Red Stripe, and great conversations with interesting people. For I-ver."

Well said Geoffrey!! I concur totally with your sentiments and perspectives re Jamaica.Peace and love!!

FJSL, like you, I am constantly obsessed by that very thought and question, of, how are we as individuals and as a people going to extricate Jamaica from the nastiness which consumes it and is suffocating it to death? Nuff respect !!

Geoffrey, you've got it! Now you see why people go back year after year.
For me, the story that typifies what TB is (and what JA used to be) is this: One Calabash, maybe 2-3 years ago, a girl friend and I were walking back to our hotel past midnight -- the Saturday night 'Calabashment' had just finished -- when we heard some strange noises. It sounded like an adult was crying and at first I thought a man might have been abusing his woman. I could see two figures walking towards us in the slight moonlight. Instinctively, my friend and I moved to the other side of the road. Just as we did, I heard a man's reassuring voice: Don't worry, man, they're not going to bother you. It's a young man from the district who has a drug problem, his relative is taking him home but he doesn't want to go.
I was so pleasantly surprised, the 'Thank you' just tumbled out of my mouth while I tried my best to let him know how grateful I was for his kindness, how grateful I was for his reminding me of the Jamaica I carry in my heart, the one that is threatened every day by the constant drumbeat of negative news.
I tell this story all the time and every time I talk about Jamaica, especially when I hear anyone, Jamaicans included, being down on Jamaica, I remind people of this Jamaica.
I know there are two Jamaicas, just like there are two sides to each of us. We have to big up this Jamaica. The other one gets way too much ink.
Thanks, Geoffrey!

i keep saying i'm going to go, as it falls near my bday every year. i, too, am amazed by the stark contrasts that lie in Jamaica. beloved tells me stories of his childhood, of August town. of no hot water & having to be inside before dark so no harm will come to you. and then there are the commercials calling for all to "come to Jamaica and feel alright." it's a dichotomy that is very confusing & hauntingly similar to many nations in the diaspora.