In My Own Words: Martin Mordecai 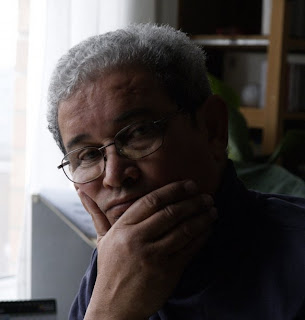 Born in Jamaica, Martin Mordecai has had many lives, including journalist, diplomat, civil servant, and publisher. His current incarnation is that of aspiring writer. He aspires in Toronto, having gone there in the mid-1990s with his family to live; they are now Canadian citizens. He is the author, with Pamela Mordecai, his wife, of Culture and Customs of Jamaica (2000), a reference work. His first novel, Blue Mountain Trouble, published by Arthur A. Levine Books, an imprint of Scholastic Inc., has just been published. A historical novel and a book of short stories are unfolding. He has ceased aspiring to be a professional photographer, but continues to enjoy making pictures (and occasionally being paid for them).

Blue Mountain Trouble began life, under another name, as a bedtime story to an eight-year-old boy who is now in his thirty-fifth year to heaven. I began the story with twins — which I figured gave me greater narrative options than a single hero — and a magical mystery goat, because my mother kept goats when I was an infant and I’ve always loved them. My son fell asleep fairly quickly, probably from boredom, but I scarcely noticed: I had become intrigued by these people and this creature who had sprung, quite literally, out of my mouth. (The next night, when I asked him if he wanted me to continue the story my son said, No, it was okay, I could read him a book.)

I wrote down what I’d made up, to give the words permanence, and went from there. Once, fairly soon after its hesitant birth and with the glamorous prospect of publication (i.e. money) from the agent for a British publisher who was touring the Caribbean looking for children’s book ideas (and which had already published work by Pam, my partner), I sketched out a plot — important elements of which still survive.

Over several years I intermittently added to the tale, bits and pieces, scenes that would come to me at odd moments. I’d give it a week’s early mornings of concentrated work, and then ignore it for a year or more.

When we came to Canada in the mid-nineties, we did many different things, as immigrants often have to. Ours all had to do with books and, in my case, photography. One learned eventually that Canadian governments at all levels (federal, provincial, municipal) have an extensive system of funding for artists and their work. But it is suitably rigorous: in most cases, literary submissions are assessed blind by a jury of your peers. At an appropriate time (i.e. when we needed the money) I dusted off some pages and submitted them with a hope and a prayer. God smiled.

A grant is three things: money, always needed; affirmation, always a good thing; and (to my mind at least, as a taxpayer) a contract to produce. So I set to work more methodically, to fulfill my obligation.

And God smiled again. Pam and another wonderful Caribbean writer, Nalo Hopkinson, had begun a mutual support scheme whereby at the end of every day they e-mailed to each other a word count for work done that day, and work done on the project to that point. Eventually the group widened to include three other writers whom Nalo knew: Hiromi Goto, Jennifer Stevenson, and Larissa Lai. Pam asked if I could join; some time later, David Findlay, Nalo’s partner, came on board as well. The purpose of the group, spread out across the continent from Toronto to Vancouver with points in Illinois and Calgary, was mutual support and encouragement. Every day we’d post our word counts. Sometimes we’d post excerpts, a couple hundred words or less. No comment was required, though people often read excerpts, and if you were having a problem with a passage, or an idea, suggestions were sought and willingly given.

It’s a new take on the old idea of a writing group, and I’d recommend an e-group to every writer who has motivational problems (and which writer doesn’t) or lives in physical or social isolation from other writers. All but one member of the initial group (she took a break to do a PhD!) now has a book that was part of the process.

But at the subconscious level, so to speak, Blue Mountain Trouble wrote itself. Apart from the twins, and the goat, and the ‘baddie’ growing something forbidden, which have been constants from the start, everything else came of following the characters and my own whimsy. At the same time, the novel is not a fond recollection of my childhood. Rather it is the construct of an ageing middle class city man exploring the lives of a peasant society in a remote rural location, and trying to get into the heads of two 11-year-old members of that community.

Of the two children Pollyread sprung, pretty much fully formed, from the beginning. Possibly because I had a model right in front of me, a daughter with a sharp mind and tongue. Pollyread led me through the story – at first, anyway. When I realized that she was hogging the narrative and the best lines, I focused more consciously on Jackson. There again I could draw, less consciously, on clay near to hand: our eldest, who is gifted with many skills, including, pertinently, mathematics and gardening. As Jackson and I went through the drafts together (five in all before the serious editing began), he became more embodied with each go-round. He is now, though not perhaps as ‘brilliant’, more than a match for his sister, and equally a player in the dramas of their lives.

To the extent that there are conscious themes in the book, I can think of only two, which also were there, embedded, from the time the story began to take shape. One is the importance of books — in everyone’s lives but especially in the lives of children. “’Book is like bird.’ Mama was always telling the twins. ‘You can go anywhere in the world in them, and them will take you anywhere you want to go.’” The twins, even Jackson, who wants to be a farmer, understand that. The second theme is the existence of the magical (the goat) in the everyday, and that ‘duppy’ don’t have to be frightening or evil.

For the rest, Blue Mountain Trouble is just something for which I give much thanks and praises. It wasn’t all my doing.