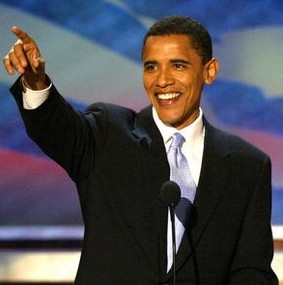 In June 2007 after reading Dreams from my Father, I donated money to Barack Obama's presidential campaign. It was the first time in my life that I had donated money to a political campaign. I had also read the platform of Senator John McCain and thought I had made an informed choice by voting  for Barack Obama. I didn't vote for Obama because he was the Black candidate.

Rather, I thought Obama was the better candidate based on the concepts he outlined in The Audacity of Hope, his thorough understanding of Western political science, and his knowledge of central figures of African-American philosophy, including Marcus Garvey's. I was also impressed by the synthesis of ideas in Dreams that led Obama to conclude, "Our sense of wholeness would have to arise from something more fine than the bloodlines we'd inherited" (204), and invocation of Marcus Garvey's famous quote, "Rise up ye mighty race" (199).

I was therefore quite surprised to read the in the Jamaica Observer that the Obama administration had "flatly rejected request for a presidential pardon for Jamaica's first national hero, the Right Honorable Marcus Garvey" on the grounds that it would be "a waste of time and resources" since Garvey had been "dead for ages." In addition, Miguel Lorne, head of the Marcus Garvey-founded People's Political Party, was dismayed by the tone of the reply:  "The language used in the reply is most disdainful. It makes you wonder if Obama actually read the request. "

Whether Mr. Obama read the request or not is immaterial. President Obama is responsible for the statements from anyone in his administration. And this statement is totally at odds with the image that candidate Obama projected in Dreams as a lover of justice who sought to emulate "the attributes of Martin and Malcolm, Du Bois and Mandela" (220). For if Mr. Obama wasn't merely posturing, then surely he must be aware of Martin Luther King's statement about justice: "The arc of the moral universe is long, but it bends towards justice."

Justice is the basis of the plea for exoneration of Marcus Garvey that I and 1275 others have signed. We contend that Marcus Garvey was wrongly arrested by the FBI under the administration of J. Edgar Hoover, who began his career by "surveilling, infiltrating, discrediting, and disrupting" the UNIA , and from which COINTELPRO saw its genesis. Marcus Garvey was the first victim of Hoover's program and it has become abundantly clear even from H. CON. RES. 24, introduced by Representative Charles Rangel, that "the case against Marcus Garvey was politically motivated, the charges unsubstantiated, and his conviction unjust."

When an injustice is done to a leader, the wound festers in the community and manifests as uncontrollable rage. The false imprisonment of Marcus Garvey is a gangrenous wound in the African-American and Pan African body politic that President Barack Obama, as a self-acknowledged inheritor of the legacy of Marcus Garvey, now has the opportunity to heal.

Now I realize that President Barack Obama cannot right all the historical wrongs done against African-Americans. That would be impossible. And as far as domestic policy is concerned, an American president does not wield as much power as many of his counterparts in other democratic nations. But presidential exoneration is the one area that cannot be questioned or rescinded by Congress.

President Barack Obama has before him a unique opportunity with the exoneration of Marcus Garvey to change the consciousness of a generation by outlining some of the values that Marcus Garvey espoused: industry, self-reliance, and unity. The Obama administration with its intimate knowledge of the details of the case surrounding the wrongful imprisonment of Marcus Garvey can perform a historically redemptive act. But it will take courage. And courage, as Maya Angelou reminds us, "Is the most important of all the virtues, because without courage you can't practice any other virtue consistently."

Marcus Garvey has joined the ancestors. The governments of this world can no longer harm or hurt him. So this plea for Marcus Garvey's exoneration is for us to show our magnanimity and gratitude. By honoring Marcus Garvey, we honor ourselves.

To be delivered to President Barack Obama
http://signon.org/sign/exonerate-marcus-garvey?source=c.url&r_by=4631897

'...it would be "a waste of time and resources" since Garvey had been "dead for ages."'

But Marcus Garvey is not dead and he will not go away.

I am truly sorry for this sorry turn of events, for I, too, had hoped that President Obama would right what was evidently so wrong: the accusation and torment of a man who was not guilty before the law. I wish to be part of any future projects you may sponsor to "set the captives free"

Give thanks, Ret. We are marching on!

If we, American citizens do not CONVINCE President Obama to sign this PARDON to CLEAR the noble name of Marcus Mosiah Garvey...SHAME ON US, Word!

This doesn't end here. We must continue to find other methods and avenues to make this pardon real. I always tell people that just because a person is black doesn't make them black.

As those who came and fought before us said, 'a luta continua...' the struggle continues.'

Power concedes nothing without a struggle so now is the time for us to gird our loins and take this fight to another level.

Maybe these guys forgot that there's a re-election on the horizon. Geoffrey is right, maybe we should have voted for the other guy.

This proves to me that we need to be organized and to put our demands to politicians before they are elected. Grover Norquist has done it with Republicans... we should take a page out of his book. It works!

Give thanks, Minister Server. Word

It's all politics. The Administration's decision was made based on perceived relevance. I think we can all see that Obama is not the change he claimed to be, that the political machinery is engraved in Washington to the point that no one elected can make independent choices- that is without "consulting" people as to political relevance and/or backlash. ("a waste of time and resources")What about exoneration based on what is RIGHT- For the man's family legacy?
Anyway, lets fight and not grovel. And at the end of the day, Marcus' plight and "persecution" is a source of pride to me. For, even if he they won't take him off his cross, he IS Honorable, Noble, and Prophet. In all truth he was wrongfully persecuted because of his Pan-African stance and this is a more inspiring to me than Obama ever will be.
I support the movement to exonerate Garvey's name for his family sake. However, tell pharaoh Garvey has already set the captives minds' free. The fact that they refuse to clear his name only serves to strengthen his martyrdom-that's what was expected. To them he has been dead for ages, for us he Lives on. Never gone, Never Forgotten.

Truly, Kaya. Marcus Garvey is our hero and we will continue to tell the Pharaoh to set the captives free.