"Look for me in the Whirlwind": Dr. Julius Garvey's Response 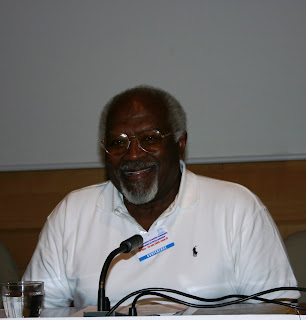 I would like to make some comments relative to the PBS documentary on Marcus Garvey, "Look for me in the Whirlwind", that was shown at the Little Theatre in Kingston on February 20th.


My criticism is twofold: (1) the film was rife with factual inaccuracies and slanderous innuendo and; (2) it lacked any real understanding of what Marcus Garvey stood for or was trying to do or what he ultimately achieved. I will attempt to deal briefly with the latter.


First was a sense of identity.


African people had the longest history and culture of all peoples and could be justly proud of same. They created the first civilizations in Africa, which were the prototypes of all others. Only recently in world history were we brought down from our pinnacle of civilization and enslaved.


Not withstanding European propaganda we were not subhuman, but we were once great and could be great again. As he said, "History is the landmark by which we are directed into the true course of life". The history of a movement, of a nation, of a race is the guidepost of that movement's destiny.


So we must know our history and our past accomplishments and that will give us the strength and courage to accomplish even more.


We do not need to depend on others for our own development, but must use our own intelligence and creative genius to solve the problems that we currently face and to determine our own agenda and hence our destiny.


He said, "Man is the individual who is able to shape his own character, master his own will, direct his own life and shape his own ends. Man is therefore the architect of his own fate and master of his own destiny.


Third was Unity and Nationhood.


A united people with a strong sense of identity had to have land where they could develop according to their own idealism. This was the basis of Nationhood.


This is what he wished for African people.


This Pan-African Nation had to have a land base in Africa, (The Liberia Project).


It is only through Nationhood that African people could be supported and protected globally.


Fourth, only through a strong economic base could the above ideological framework be carried out. He said, "Every student of economics knows that the race can only be saved through a solid industrial foundation. Take away industry from a race, take away political freedom from a race and you have a group of slaves. A race that is solely dependent upon another for its economic existence sooner or later dies.


Africans, where ever they were therefore (a) had to be in control of their resources and the means of production (b) Africans needed to constitute a trading block made up of those on the continent and those in the Diaspora.


Today numbering 600,000,000; (c) they also needed to control the means of transportation and the means of communication amongst each other.


Fifth, only those who had mastered the physical and psychological sciences would be able to prosper and dominate competitively in the future. Therefore education of all ages and in all locations was paramount. He said, "The battles of the future, whether they are physical or mental, will be fought on scientific lines and the race that is able to produce the highest scientific development, is the race that will ultimately rule.


The significant caveat for African people was that spirituality had to control the knowledge of and use of scientific developments. This was the only way to combat the evils of modern scientific materialism.


Sixth, one had to apply these principles pragmatically, depending on time and place and using one's creative genius.


A host of solutions were put forth in the early 20th century that were needed at the time. (A) The weekly newspaper the, 'Negro World', published continuously from 1919 to 1933. The largest Negro weekly in the U.S.A. (B) The Negro Factories Corporation. Employing over 1,000 people in N.Y.C. alone. (C) The Black Star Line had four ships in all at a time when shipping was the means of transportation for raw materials and manufactured goods worldwide. (D) The Black Cross Nurses; (E) the African Orthodox Church; (F) the African Legion, etc.


Seventh, Garveyism represented a way of life that did not separate the spiritual from the secular and therefore represented an integrated view of man and indeed a New African Humanism based on the Father/Motherhood of God and the brother/sisterhood of woman/man.


God was a formless permanent, spiritual force that created the universe and everything in it and was both immanent and transcendent simultaneously.


In order to discuss or image God one had to resort to anthropomorphism. Each race, ethnic group or cultural entity could picture God in their own image.


This was necessary to make God, universal Love and human transformation towards perfection, relevant to a specific time and place on the material plane. Garvey thus wrestled God away from the white race and gave her to everybody.


Ninth, Garveyism was a Philosophy, Theology, Psychology and Social Action Plan and as such is timeless and can be applied by all peoples in any location.


A useful mantra for humankind is, One God ! One Aim! One Destiny! One Love!


Even though Garvey's organizational structure was largely dismantled by J. Edgar Hoover, the Justice Department, 8 fulltime agents, countless informants and saboteurs, as well as internal dissension, the depression and the second world war, Garvey's brand of Pan Africanism was resurgent by 1945.


Dubois had called my mother to ask who to invite to the 5th Pan-African Congress in Manchester. Both himself and Padmore had at this point given up on communism and acknowledged that Garvey was right.


Amy Ashwood Garvey was there, Jomo Kenyatta and other Africans that would lead many national liberation movements in Africa, were also present.


Nkrumah, Azikewe, Kenyatta, Lumumba, Nyerere, Mandela, have all attested to Garvey's influence on their thinking and development of national consciousness.


In the U.S., Garvey is the father of all Nationalist Movements. El Hajj Malik el Shabazz (Malcolm X) was his most direct ideological disciple.


His influence as anti-colonial champion and on all political independence movements in the Caribbean is well known.


He is Jamaica's first and most popular National Hero.


His bust rests in a prominent position in the Hall of Heroes of the Organization of American States in Washington, D.C.


Marcus Garvey never set foot in Africa is well known, however my mother, his widow, Amy Jacques Garvey was invited by the government of Nigeria to attend the inaugural ceremonies of the installation of Dr. Nnamdi Azikewe as Governor-General in November 1960. This was a tribute to the memory of Marcus Garvey, who he considered a mentor.


She then went to Ghana as the guest of the government and was honored there. She met Haile Selassie, the Emperor of Ethiopia, King of Kings, Elect of God, and Lion of Judah.


So much for those who speak of Garvey's megalomania and Penchant for Pomp.


I will close by quoting Frank Hill in the Daily Gleaner, 17th August 1960 under the caption-"The Prophet of Black Zionism", he states in part; "What makes a man great? It is, I think, the universal quality of the contribution he makes to the civilization of his times. The accent is on the word universal, for the quality of his vision must be such as to be able to hold the attention of mankind, rather than mere isolated pockets of men grouped in special circumstances....."


I agree with the attestation of Frank Hill to Garvey's greatness and I am equally sure that he would agree with me that mediocrity cannot tarnish the brilliance of our shining Jamaican Black Star, MARCUS MOSIAH GARVEY.

To be delivered to President Barack Obama
http://signon.org/sign/exonerate-marcus-garvey?source=c.url&r_by=4631897