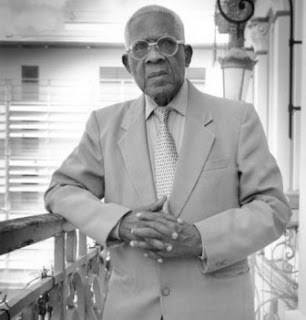 I am a slow, deliberate writer, so sometimes it takes me a while to process a monumental event. The death of Aime Cesaire was one of these events.

I also realized as the day went on that I was remiss in not providing a personal context for the life of the Cesaire, especially for the younger readers of this blog who are sometimes deceived by the illusion of time and linearity into believing that certain actions are inevitable—thereby dismissing personal agency and courage. And Cesaire was certainly courageous, and the impact of his work was felt beyond the Caribbean.

It is also one of the aims of this blog to provide the historical context between writers of Caribbean writers from the past and the present. For if this link is broken, then the writer finds himself or herself reinventing the wheel. (In some cases, this is not entirely bad—you need a dust up every now and then). But in terms of a nascent regional literature—a corpus of literary works that describes the lives, dreams, hopes tragedies of a people—such continuity is desirable.

This is especially true when a nation or region has been subject to outside forms of oppression such as British, French, Spanish, or Dutch colonialism, which was the thread that led me to Cesaire’s work and goes back to my undergraduate days at the University of Miami.

During that time, I was still trying to figure out the basis of my poetics (not that I have arrived at any final conclusions) and I began to study the work of Langston Hughes and the Harlem Renaissance and Leopold Senghor and Aime Cesaire and Negritude.

I was struck immediately by Hughes’s manifesto, “The Negro Artist and the Racial Mountain” and even more affected by the principles of Negritude that Senghor and Cesaire applied to poetry: “An image or group of images that were analogical, melodic, and rhythmical.” This definition helped me to sort out my own poetic tastes. For whereas the work of TS Eliot, Wallace Stevens, and Ezra Pound had rich imagery, they lacked melody and rhythm. And while the work of the dub poets of my generation were “melodic and rhythmical,” they lacked the kind of imagery that I’d seen in the work of Walcott, Scott, McNeill, and Brathwaite—whose work was directly influenced by Cesaire.

But another reason for my enormous respect for Cesaire was his fierce stance against French (and by extension) British, Spanish and Dutch colonialism. Now I realize it is unfashionable to speak about slavery and colonialism, and I certainly do not subscribe to any kind of victimology, but a great evil was perpetrated against people of African descent. Cesaire was one of the first to speak out against this evil.

And while it may be argued that the French, British, Spanish and French were all at one time subjugated peoples, African colonialism was not only different in scale and with the myriad of players involved, it came with a type of thorough brainwashing and denigration of a people that led to all kinds of loss of identity (read Fanon) and self hatred—some even loving the master’s whip to the caress of a brother or sister. Effects that we still witness the legacy in many of the inner cities of North America and the Caribbean. Colonialism threatened the soul of people of African decent. And if the soul exists, it is connected to the integrity of the individual. Cesaire gave us back our integrity.

Aime Cesaire and Negritude began one of the movements that Professor Rex Nettleford has called the “decolonization of the mind.” For poets such as Cesaire, freedom is not an abstract idea. His legacy is for us to pursue freedom (self-actualization) in the body and the mind—the abilty to realize the full expression of an individual talent unbound by race, class, creed, religion, gender or sexual preference.

For if the goal of any life is freedom, then Aime Cesaire was a light.

It has been too long, and it should not have to take such an event for us to reconnect, but I give thanks anyway. Your blog wll surely be an effective vehicle for reaching so many of today's readers, who might be so separated in time (generation) and language/culture from M. Cesaire as not to appreciate what his contributions were, or what it meant for a Black Martinican in his time to make the social and literary statements that he was making.

We were fortunate enough to meet him while we were in Martinique for a Caribbean Studies conference in the late '90s. He greeted the gathering seated behind an ornate table in one of those archetypical centre-ville tropical government office buildings setback in a courtyard, in a large second-story room with tiled floors and tall casement windows opened wide to welcome the meager breezes (vintage air conditioning). He spoke so softly that we had to strain to hear him, even at some remove from the random street sounds outside, but his presence -- stately, dignified, self-assured but with no trace of arrogance or egotism -- gave force to his words. After a while, it was almost as though it didn't matter if we caught every word or not; we were catching HIM: an icon, a producer and a product of another age, when such new phenomena as surrealism took on a haunting significance and could burn the page like acid when it flowed from the pen of a conscious Black man in a world that denied such a thing could, or should, exist. We were basking in the presence of an innovator who had lived long enough to be a spectator at the consequences of his innovation, and what we were gleaning from his barely audible voice were his newly minted reflections, whole or in part, as fate would have it, on the scene he beheld today.

Afterwards, he greeted each of us personally, patiently, as we took turns to shake his hand, make some comment or ask a question (he had some command of English; I got to serve as erstwhile interpreter for a few people whom he didn't quite understand, which he appreciated and certainly made me feel good).

I had the advantage of having had been familiar with his work, and of having read insightful criticisms that helped me to understand its deeper significance in historical and social context. As when we read Frederick Douglass or Marcus Garvey or Countee Cullen and Claude McKay today, we are keenly aware that the style has changed, the perceptions of reality are different, the everyday experiences that shaped people's lives and sense of purpose are radically changed (or are they, really, on the "racial" front?), but we also realize that what has not changed, and Cesaire so embodied that concept with his subdued yet commanding presence on that day, is that timeless truth that "there is no separation between the artist, the warrior, and the people." Art, true art, in other words, can (and, dare we say, must) be a weapon, not for destruction and subjugation but for affirmation, of life, against those very forces. Paul Robeson probably articulated it as eloquently as anyone in the famous quote that is now the epitaph on his grave: "The artist must elect to fight for slavery or for freedom. I have made my decision. I had no choice." That is what I strive, humbly, inadequately, to live by. That is what Aime Cesaire embodied.

He ran an extra-long leg of the race, a full 94 years, and now the baton has been passed to us...

Be well, be strong, be blessed.

Among the many truths you say, Brother Geoffrey, two resonate with me.

For if this link is broken, then the writer finds himself or herself reinventing the wheel.

Cesaire gave us back our integrity.

I read the obit in the Independent this morning, and was struck with the thought that Césaire's passing marks the very end of an extraordinary age. He was the last connection with the writers and activists of the early twentieth century, with an era now long.

Daniel Singer told me that during the French student protests of 1968 he was talking with Césaire in Paris while the students were protesting the expulsion of Daniel Cohn-Bendit from France, and chanting 'We are all German Jews!' Césaire told Singer, 'I would be there with them chanting that, but no one would believe me.'

Fragano, this is so true. Yes, he seems to have been the last of that "extraordinary generation."

One must be really like you from the native country to comprehend,
One must be truly like me from the tropical country to understand
And to feel at this very moment the stinging lashes
Unjustly burning the flesh of our ancestors to ashes.

One must be in our skin; one must have our blood,
And have walked under the hot sun of bad weathers
To understand the long moaning of our soul,
The suffering of our people and the miseries of our ladies.

In my heart, you remain, ad vitam aeternam, one of the fathers of negritude,
Which has inspired your children scattered all over
The world. Today, you’re gone and I’m sad. I still feel the iron collar

Of slavery smothering, strangling, and suffocating me,
And the kicks of the iron boots of this sad and inhumane history.
Brave Poet! Many thanks! May God welcome you in His Beatitude!

Thank you, Hébert Logerie, for this wonderful tribute.