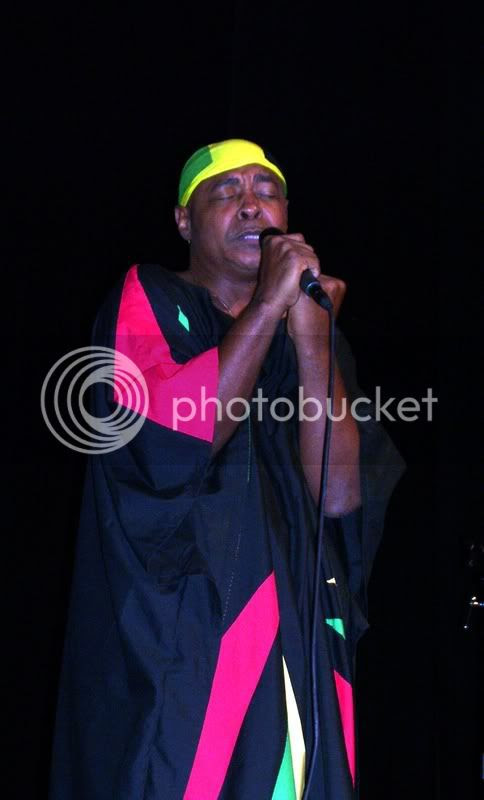 The origins of dub poetry begin somewhere between the dancehalls of Kingston and London and the work of poets such as Kamau Brathwaite. Unlike traditional poetry, dub poetry emphasizes sound (repetition, rhyme, and word play) rather than sense (imagery, metaphor, simile) to convey themes of social (in)justice. Besides the subtle racism and class warfare that greeted their work, the earliest pioneers of dub poetry, Linton Kwesi Johnson, Oku Onoura, Benjamin Zephaniah, Malachi Smith, Mutabaruka, and Mikey Smith, confronted resistance, especially in Jamaica, because it was thought that sense (imagery, metaphor, simile) was sacrificed to sound. However, in the best dub poetry there is a fusion of sound and sense that is emotionally stirring, and many who have been trained to mistrust their emotions often find these sensations uncomfortable. At its worst, there’s a monotonous obedience to sound that produces the same effect as poems that rely only on sense—boredom in the audience. In many ways, dub poetry resembles the chanting style of dancehall deejays, but whereas the deejay is bound to the riddim track, the dub poet experiments with words/sounds (almost like a jazz musician) and transcription to the page aims at reproducing the effect of the beat.

As Malachi Smith explained in the dub-u-mentary, Dub Poetry: The Life and Work of Malachi Smith, his dub poems usually come from a beat suggested by the cadence of the refrain which is repeated throughout the poem and acts as a mnemonic device in long compositions. From the first composition to the performance, the poem is revised primarily to the demands of the rhythm. This process can take anywhere from a few hours to several months before the poem is ready for performance on the stage, in a recording studio or publication in a book or magazine.

Several dub poets such as Oku Onoura have been successful with CD sales, stage performances, and book publication. In this excerpt from “Reflection in Red” Onoura demonstrates some of the devices he has frequently used: repetition, rhyme, and word play with the word, “red” which assumes multiple meanings associated with blood, allusions to the music of Peter Tosh, and Babylon the Great of the Apocalypse. These poetic devices are controlled by the theme of a lack of social justice and the rhythm and rhyme reinforce the theme.

an de blud a run

By the use of “nation language,” enjambment, rhyme, repetition, and inventive use of the word, “red,” Onoura creates with sound and imagery, the experience of dread during the seventies in Jamaica. The staccato lines build throughout the poem and sometimes with the use of repetition, similar to the echo of an old tube amplifier, he emphasizes one of the main ideas of the poem;

Dub poetry has evolved from the early years of being dominated by male poets and in recent years, dub poets such as Dibi Young and Lillian Allen have risen to prominence and are widely praised within the genre for expanding the concerns of dub poetry to broader and more inclusive themes that deal with injustice against women and the empowerment of women.

Today is the last day for submission: “The Top Ten Caribbean Novels”

I found your Blog very interesting.

Thankyou Geoffrey for bringing me back to a wonderful form of poetry, more often eclipsed by what is becoming the banal world of spoken word. I remember first hearing Benjamin Zephaniah in my teens and being exposted to the works of Linton Kwesi Johnson, a modern day hero.

Thanks for rekindling this interest, and although we have a lot of Caribbean female poets such as Gloria Escoffrey, Paula Obe, etc. its refreshing to notify the dub poets in addition to this list.

Continue to inspire my friend.

Dear David,
Thank you. Actually, the priase belongs to one of my readers who asked what was dub poetry and how to write a dub poem. I then realized that I had assumed that may of the readers of this blog knew about dub poetry. My mistake. So this post is in repsonse to that question, and I felt that I had to post this primer to give some background on a form that I grew before my eyes.
I'll be talking more about this on Monday, so stay tuned.
But more importantly, give thanks!

“The aim of art is to represent not the outward appearance of things, but their inward significance."


“The task of art is to transform what is continuously happening to us, to transform all these things into symbols, into music, into something which can last in man’s memory… The work of a poet never ends. It has nothing to do with working hours.”


"Culture helps shape and respond to identity. It occurs both subconsciously and consciously, and it is elastic and malleable. Central to culture is change, and that change happens whether we try to make it happen or not. When a group of people ignores its culture (in the anthropological sense) culture change will occur without direction and without purpose. I believe that The Bahamas, by ignoring artists (whose main function in society, if we want to be really crass, is to make manifest the subconscious elements of collective cultures), has consigned itself to having its culture change on it without realizing, comprehending, or affecting that change."


"Stop settling for what’s good enough and start creating art that matters. Stop asking what’s in it for you and start giving gifts that change people. Then, and only then, will you have achieved your potential."


"This is how writers must think, this is how we must sit down with pen in hand. We were here; we are human beings; this is how we lived. Let it be known, the earth passed before us. Our details are important. Otherwise, if they are not, we can drop a bomb and it doesn’t matter.”

~ Natalie Goldberg, Writing Down the Bones


"The immediacy of a work of art is what gives it lasting life. It is a paradox, of course, which is to say a life-giving contradiction, the opposite of a solvable mystery. And when one focuses the thoughtful mind on what is there before us, what is immanent, then a sense of loss hazes in, ineluctably. For that idea-generating surrender to the immanent must pass, and quickly. The trick is to enshrine that surrender in the work, so others can experience it inexhaustibly. That is the function of art—not self-expression, not social commentary, not innovating on or reacting to what other artists have done. To defy the temporal, the flux, art enshrines."

"A country’s literature, in whatever language, whether indigenous or hybrid or adopted, is her people’s memory: there lies literature’s chief value, for a people is only as strong as their memory."

Marcus and the Amazons