The Bedstuy Notebook: The Men
Some men know what to do with a woman
tell difference between the scent of girls
sounds of a woman underneath them.
Men who know how to open
the sky in a woman in one glance,
what moment is plum
for lovin’
drum meaning memory.
Some men know what to
do with their hands
how to set a house on its foundation,
how to hold a woman
gently,
like smooth wood of a hammer
as they follow
anywhere she wants to go.
Other men know how to build things,
how to measure
intricacies of electricity,
difference between gas lines, water lines,
complexities of knowing exactly,
where to lay their lips.
Some men know
more than three ways to open a lock
and a woman's heart,
men who carry understanding
in their sweaty, dust-filled hair.
"The Bedstuy Notebook: The Men" by Jacqueline Johnson. reprinted in Caribbean Erotic, Peepal Tree, 2010. 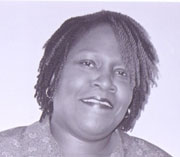 What I love about this poem is the subdued sensuality. It's a grown-up poem with a working class sensibility about men who work with their hands and know how to "open/ the sky in a woman in one glance." These are strong men who know the "intricacies of electricity" and how to "follow/ anywhere she wants to go." At the center of "The Bedstuy Notebook: The Men" is a knowing (in the biblical sense?) which clearly works because of what it doesn't say. But we all know tings a gwaan.
About Jacqueline Johnson
Jacqueline Johnson is the winner of the third annual White Pine Press Award for poetry. Her collection, A Gathering of Mother Tongues, was published by White Pine Press in 1998. Ms. Johnson has received awards and residencies from the New York Foundation of the Arts, McDowell Colony for the Arts, Blue Mountain Art Center, Soul Mountain, Hurston Wright Foundation and is a Cave Canem fellow. Ms. Johnson currently resides in Brooklyn, New York.
***