An Open Letter to Mikey Jiggs 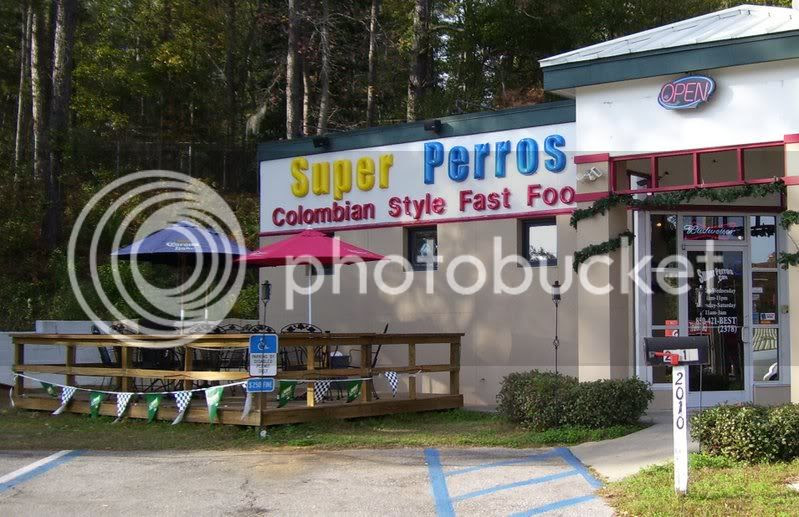 Mikey, you may be wondering what this picture has to do with anything, but on December 15, 2006, you asked me some questions that have bothered me into 2007. I’ll try to answer some of the questions in a way that I’ve always used to figure things out. I’ll tell you a story. This picture is part of the story.

Last year when my daughter, Anna, graduated from FSU, our tribe (my wife, our three children, abuela, and three aunts ) visited a little Colombian restaurant in Tallahassee, Florida. I’d told my daughter that we wanted to eat in an inexpensive restaurant, but the food had to be good. Anna said, “I know just the place that you’re looking for,” and she took us to Super Perros.

As we pulled up to the restaurant, it wasn’t exactly the kind of place I’d thought about celebrating my daughter’s graduation, and Anna sensing my trepidation said, “Don’t worry, Dad. It will be all right.” I trusted her judgment, but I wanted to know some more about the restaurant. I asked her how she had discovered Super Perros, and she told me that whenever she and her friends wanted a place to sit, eat and enjoy some music, they always came to Super Perros. She also thought it was a good place for her abuela, who is from Colombia, to try some of the dishes such as papa criolla, empanadas, and arepas made Colombian style. Abuela loved the idea.

We parked the cars and walked inside the restaurant and it was like we had been transported to a small restaurant in Colombia: the sights, sounds and smells overwhelmed us. The owner, Alex, talked with us as we ordered the food, then escorted us out to the patio, and then asked us if we’d like to listen to any special music. My wife suggested the Carlos Vives CD that we had in our car, and Alex put it on his stereo system.

By the time Alex came back, we had already started eating, abuela asked about the papa criolla—it didn’t taste like the ones she’s had in Miami, but tasted more like the kind she’s eaten in Colombia. Alex told her that many restaurants used either the canned or bottled papas (potatoes), but he imported most of the ingredients from Colombia. She was impressed and asked him about the cost and how he got started. Alex was only too willing to share his story.

Super Perros started as a dream in Alex’s head. He sold hot dogs and hamburgers outside his house and soon ventured to other locations. Every day as he passed by a pizza store where Superperros now stands, he told himself, “One day. One day.” He said he worked like a dog for six months pushing the cart and nothing was working, and he thought of giving up. His wife said one word, constancia (consistency). He went back to work and redoubled his efforts.

Soon word spread about the great food that this Colombian guy was selling from a hot dog stand. Two customers became four; four became eight and so on. Soon Alex had enough money for a down payment to buy the pizza store and give up the hot dog stand about which some of his friends had teased him. Alex is from Cali, Colombia, and there is a joke that if you go to the middle of the desert, you will find a Caleno with a stand selling something.

Alex redecorated the store with photographs of Colombia, Botero prints, and indigenous ceramic sculptures. He also sold T-shirts with Hecho en Colombia (Made in Colombia) on the front and Super Perros on the back. Abuela bought a T-shirt that she now wears proudly. Alex is proud of his accomplishments and that pride is extended to other Colombians and is reflected in the way he advertises his business. In addition to the marquee, Alex has Super Perros signs on his car, a small sign at the entrance, and the web site.

And, of course, the food was scrumptious. We devoured the papa criollas, arepas, drank Colombia beer and soft drinks while we listened to Carlos Vives.

As I sat there listening to the vallenatos, I asked myself why can’t we do this in Jamaica? Of course, I knew people like Albert Lee and several other entrepreneurs had done this in Miami, but why couldn’t these results be replicated in Jamaica?

As I was wondering about this, my thoughts were interrupted by a group of Colombians, Anna’s friends, who had come to Super Perros to celebrate their daughter’s graduation. I had to stop slouching, thinking, and drinking beer. People from Bogota, Colombia are very formal. When I was in Bogota, the man who cut the lawn took off his shirt and jacket to cut the lawn, and when he was finished came back to the front door in his shirt and jacket.

Abuela greeted them and after the introductions, my sister in law talked with one of the parents who had just come back from Colombia about life in their country, the drug dealers and the continuing effects of La Violencia. They exchanged stories, gossiped and laughed. When they left, I went back to slouching and thinking about the Philps and the Patinos who have been united by histories of civil wars, drug dealing, spiraling murder rates, and creativity. And I thought about your questions, Mikey. I wondered how I could translate this “event in consciousness” into language.

Of course, I’ve chosen to blog about it and this is one way about talking about your questions, which are really questions about identity.This story is merely to set the groundwork for the discussion, and an example of how a choice in creating an identity can have a positive result.

In the next few posts, I’ll try to answer these questions from the perspective of the three subjects that have shaped my life: my family, my country, and my writing. Your questions are also similar to the concerns raised in Olivier’s post: Who are we? Where have we been? Where are we going? Why have we stopped asking these questions?

A beautiful post--I look forward to seeing where this thread is going.

Why can't we do this in Jamaica? That's your question. I've always lived in the states, but I've often wondered a version of the same thing: why are some communities so welcoming, others so forbidding, why do some embrace newcomers and others shun them? As I have moved around from Washington to Massachusetts, Connecticut, Indiana, and New Jersey, I have seen differences that still surprise and puzzle me.

I am eager to read your thoughts on the answers...

This may come as a surprise, but I am also looking forward to where this may be going. It's very exciting because I've never written like this before.

Right now, all I have is a jumble of ideas and because I have a self imposed schedule of 3 posts per week (MWF), it's scary and wonderful at the same time.

Glad you're coming along for the ride.