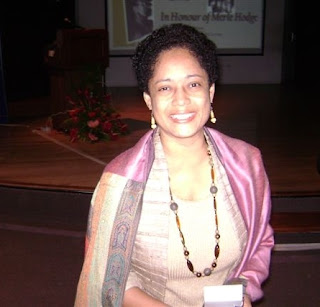 from the manuscript, REDEMPTION RAIN.

Jennifer Rahim is a Senior Lecturer in Literature in the Department of Liberal Arts, The University of the West Indies, St. Augustine, Trinidad and Tobago. She is a critic, poet and short story writer. Her articles on Caribbean literature have appeared in MaComere, The Journal of West Indian Literature, Small Axe and Anthurium. She edited with Barbara Lalla a collection of Cultural Studies essays entitled, Beyond Borders: Cross Culturalism and the Caribbean Canon (UWI Press 2009).

Her creative publications include three poetry collections: Mothers Are Not the Only Linguists (1992) and Between the Fence and the Forest (2002) and Approaching Sabbaths (2009). She has one collection of short stories, Songster and Other Stories (2007). Approaching Sabbaths was awarded the 2010 Casa de las Américas Prize for best book in the category Caribbean Literature in English or Creole.
***

Wow. Nice. Have been looking forward to Fridays for a while now. Have been getting rewarded.

Ret, it has been a pleasure to publish these poems. And next week's poem promises to be another (great) one!