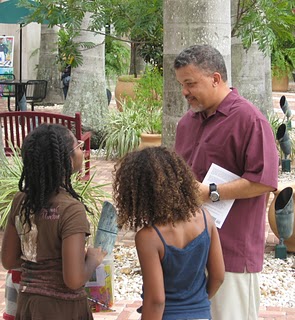 When I first learned that I was going to be a father, to say that I was overwhelmed would be an understatement.

I was still in graduate school at the University of Miami and trying to learn the skills that I would need to become a writer and teacher. So when my wife presented me with a pair of baby booties as a hint, I was determined to provide my children with the best environment in which they could grow to become healthy, creative individuals who would be able to provide for themselves and to share their talents within our community. They would be our gift to the future.

So far, I think my wife and I have done a good job. My children have grown to become three remarkable individuals whom I love dearly and I am proud to be their father. As I have taught them, they, in turn, have taught me many things at different times in their lives and mine. And as they have grown older, the lessons that they have been teaching me have now solidified into character.

From my eldest, I have learned to continue living and loving intensely. The elder has reminded me that no matter how much “wisdom” there may be in the world, the experience of life is your own and sometimes you have to “feel the rain on your skin.” And from my youngest, I have learned that life should be lived with integrity, for he is in many ways a noble young man.

Of course, I could list many more “life lessons’ that they have taught me, but my most poignant memory about what children have taught me has nothing to do with my children. And I think it has stuck with me because it strikes at my twin vocation as a writer/teacher and my protective role as a father.

A few years ago, I was hired by TigerTail Productions to be a part of the Poets-in-the-Schools program of Dade County Public Schools. Along with Adrian Castro and Jeffrey Knapp, we became known as the “Bicycle Poets.” On warm, sunny South Florida mornings when eager students would be sitting out on the lawn or playground of their elementary school, we’d ride in on our bicycles *fanfare and applause* to listen to the children read their poems. Then, we’d conduct mini-workshops and we’d teach the kids how to write poems. After a week or so, depending on the school, we’d collect the poems and publish a chapbook so that each student could have a copy of a poem s/he had written.

As we saw it, working for the program was easy because in most of the schools, especially in affluent neighborhoods, the kids were highly motivated and loved to express themselves. For many of them, learning was fun.

Jeffrey, Adrian, and I did this for many years—sometimes as a trio, sometimes singly. The incident that stands out in my mind was when I went alone into one of our so-called underserved schools in Miami. I was excited about visiting the school because I’ve always liked working in schools with predominantly black and brown children. Many of the kids in these schools need role models to show them that it is possible to have a career and that they don’t have to accept whatever circumstances they are in as the determinants of their futures.

The day before I went, I called the principal and the homeroom teacher to make sure everything was ready. I prepared my handouts and practiced all of my exercises that had worked in many other schools. I was ready. I was excited. I was pumped.

However, when I got to the school and began the exercises, none of the kids responded. Apparently they had been told by the teacher that they needed to "behave themselves" and I later learned that this teacher ran “a tight ship.”

The workshop was a disaster. And this went on for three hours for three consecutive days. The children wanted to learn, wanted to share, wanted to express themselves because that’s how children are--they want to be recognized. But they were in a stifling environment and they barely responded to anything. I also did not want to undermine their teacher’s authority because as I was told, I wouldn't be there to clean up whatever "mess" I'd created. It was one of the most disheartening experiences that I’ve ever had as a writer and teacher. And as a father, I was enraged at my inability to protect the children from a teacher who was killing the creativity of the children in her care.

Fifteen years later and I’m still angry. Yet I took away many lessons form that incident. I learned that children are naturally giving and spontaneous and if we are not willing to accept some of the “wild energy” of our children and if we continue to treat our schools as warehouses, then we should be prepared to accept the death of their imagination. We should also be prepared when they seek to get the recognition that they crave in self-destructive ways. What’s even worse is these dead zones are in schools where the children will need their creativity to grow beyond the often dire circumstances in which they find themselves. For many of them, learning is never fun.

It was a hard lesson for me. But it also toughened my resolve to foster the creativity and individuality of my children and to become the best father, writer, and teacher I could be.


***
This is part of a group write project @ Middle Zone Musings: What I Learned from…Children.

What a disheartening phrase: "the death of creativity", Geoffrey! My heart aches for such a thing in those young kids.

Sounds like you and your friends are doing some great work, though. Yep, we can sure learn a lot from children if we just keep our eyes open to them!

A tip o' the hat for the WILF entry, Geoffrey!

Great post Geoffrey - it makes me wonder why teachers do that? I think they are in the wrong profession. It also makes me want to talk to the prinicipals that allow this method of teaching. It's really important parents step up to the plate and not allow their kids creativity to be so stifled.

Yes, it was disheartening. It's also one of the reasons I keep on.

Thanks for the great topic.

Deb, there are some principals who are more interested in control and having a great image of their school rather than actual learning...this extends to our FCAT in Florida where some are more worried about test results than children engaged thie own education.

Are you sure you were't teaching a class in the Caribbean? Sounds familiar

Wizzy, Welcome!
Don't get me started with my observations about the Caribbean.

I had a similar experience in a first grade classroom. Unfortunately my son was part of the class and we discovered too late what damage was being done. A lot of love and creativity from his second grade teacher began the road of repairing the harm done.

My wife teaches second grade and she regularly encounters this kind of damage. Luckily, she is one of those fine teachers who can lovingly bring back and rescue many, if not most, of the children in her care.