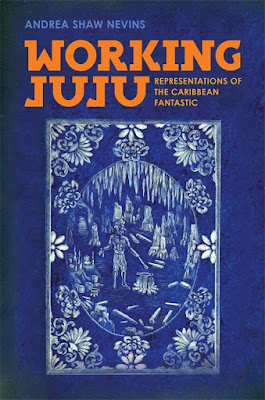 Working Juju examines how fantastical and unreal modes are deployed in portrayals of the Caribbean in popular and literary culture as well as in the visual arts. The Caribbean has historically been constructed as a region mantled by the fantastic. Andrea Shaw Nevins analyzes such imaginings of the Caribbean and interrogates the freighting of Caribbean-infused spaces with characteristics that register as fantastical. These fantastical traits may be described as magical, supernatural, uncanny, paranormal, mystical, and speculative. The book asks throughout, What are the discursive threads that run through texts featuring the Caribbean fantastic?

In Working Juju, Nevins teases out the multilayered and often obscured connections among texts such as the Pirates of the Caribbean film series, planter and historian Edward Long's History of Jamaica, and Grenadian sci-fi writer Tobias Buckell's Xenowealth series set in the future Caribbean. Fantastical representations of the region generally occupy one of two spaces. In the first, the Caribbean fantastic facilitates an imagining of the colonial experience and its aftermath as one in which the region and its representatives exercise agency and in which the humanity of the region's inhabitants is asserted. Alternately, the fantastic is sometimes situated as a signifier of the irrational and uncivilized. The thread that unites portrayals of the fantastic Caribbean in the latter kind of works is that they tend to locate Caribbean belief systems as powerful, even at times inadvertently in contradiction to the text's ideological posture. Nevins shows how the singular "Caribbean" identity that emerges in these text is at odds with the complex historical narratives of actual Caribbean countries and colonies.

About the Author
Andrea Shaw Nevins is assistant dean for academic affairs and a professor of English in the College of Arts, Humanities, and Social Sciences at Nova Southeastern University in Fort Lauderdale. She is the author of The Embodiment of Disobedience: Fat Black Women's Unruly Political Bodies.