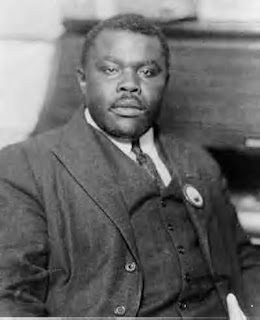 Miami, May 30, 2011 - A group of artists across North America, Europe, Africa, and the Caribbean have created an online petition to request a full pardon for Marcus Garvey, founder of the UNIA, and a national hero of Jamaica. The goal is to get 10,000 signatures and to deliver the petition to President Barack Obama.

“When I read about the efforts of the Hon. Olivia ‘Babsy’ Grange in Jamaica, I decided to begin a similar movement here in North America,” said Mr. Geoffrey Philp, a Jamaican author and poet. “Marcus Garvey has long been an inspiration because of the values of self-reliance and industry to which he devoted his life.


After corresponding via email with other writers and artists, we decided to create a Facebook page https://www.facebook.com/ExonerateMarcusGarvey and to put the petition online http://signon.org/sign/exonerate-marcus-garvey?source=c.url&r_by=4631897
so that anyone who cares about justice can join in the cause.”

We are petitioning President Barack Obama to exonerate the Rt. Excellent Marcus Mosiah Garvey, leader of the first and largest economic justice movement in the USA and the world, and the first named National Hero of Jamaica.

On January 12, 1922, Marcus Garvey, founder of the UNIA, was arrested by the Bureau of Investigation and charged with mail fraud. In 1925, Marcus Garvey began serving a five-year sentence in the US penitentiary in Atlanta, Georgia. After several appeals, his sentence was eventually commuted by President Calvin Coolidge, and he was deported to Jamaica. It is now abundantly clear (and legal scholars agree) that Garvey did not commit any criminal acts, but as Professor Judith Stein has stated, “his politics were on trial."

We think the President will agree that this year, 2012, the 125th anniversary of Marcus Garvey's birth, is a most timely moment to correct this historic miscarriage of justice.

“This is a cause that President Barack Obama can fully embrace,” Philp continued. “In Dreams From my Father, President Obama has acknowledged Garvey’s influence by quoting one of Garvey’s more famous lines: “Rise up, ye mighty race.”

http://www.international.ucla.edu/africa/mgpp/sound.asp (2 sound clips of his voice)

Excellent move Geoffrey and thanks for the various links !! Nuff respect !!