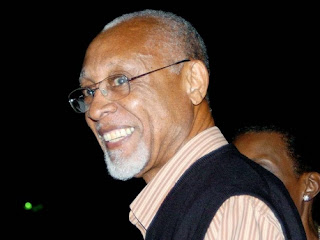 "Professor Chevannes has left a void as an outstanding mentor in our society," Mr. Golding said, in a statement issued by Jamaica House shortly after the Professor' passing at the University Hospital of the West Indies (UHWI) on Friday afternoon (November 5). He was admitted to the hospital in September in serious condition.

The Prime Minister said that, in addition to his outstanding contribution to the University, Professor Chevannes will be remembered as a leading activist for peace in Jamaica, as the head of the Violence Prevention Alliance.

"To his wife, Pauletta, his children (daughters - Abena and Amba), members of his family, and friends, I extend my deepest condolence," Mr. Golding said.

The UWI also paid tribute to Professor Chevannes in a release, stating that his passing was a tremendous loss for the university, "to which he devoted almost a lifetime of service."

"Professor Chevannes joined the UWI in 1973, and was continuously engaged with issues dear to the hearts of the Jamaican and Caribbean people throughout his career", the university said.

As a Masters student, he was involved in the study of Afro-Caribbean culture and religion, as well as one of the earliest scientific studies of the social impact of Ganja in Jamaica.He went on to do a Ph.D on Rastafari at Columbia University. From work in these areas, he published two books Rastafari: Roots and Ideology and Rastafari and Other African Caribbean Worldviews.

He was also well known for his more recent work on socialization, the family, fatherhood, masculinity and sexuality; out of which came his book Learning to Be a Man: Culture, Socialization, and Gender Identity in Five Caribbean Communities. In 2006, he published Betwixt and Between: Explorations in an African-Caribbean Mindscape which provided his insights into the essence of Caribbean culture.

He was subsequently appointed Dean of the Faculty of Social Sciences, a position which he held until 2004 when he was appointed Director of the newly created Centre for Public Safety and Justice. He played a leadership role in the University Township Project, which built on work that he had done for many years in the surrounding communities of August Town.

He was the recipient of several national, international and university awards: Commander of the Order of Distinction, the Institute of Jamaica Centenary Medal for work in the field of culture (1979); the Norman Manley Award for Excellence in the field of social development (1997); the UWI Guild of Graduates Pelican Award for contribution in the field of anthropology (1998); and the Vice-Chancellor's Award for Excellence in research, teaching, University service, and service to the wider society. He was also an Honorary Fellow of the Royal Anthropological Institute.

He we was Chair of the Council of the Institute of Jamaica, founder of Fathers Incorporated, and of Partners for Peace, and is recognized for his original contribution to Jamaican folk and religious music.

He chaired the National Commission on Ganja in 2000-2001, was a member of the Peace Management Initiative (PMI) of the Ministry of National Security, Chairman of the Jamaican Justice System Reform Task Force and Co-chaired the CARICOM Commission on Youth Development.

One of his books was on my reading list. I send my condolences to his family.